After the second wicket, Bangladesh felt a similar deja-vu moment experienced against India until Rumana Ahmed and Fargana managed to push Bangladesh to 38 runs in 9 overs. Together they put up a partnership of 44-runs for 4th wicket. But the captain had to leave soon though she played her part scoring 25-ball 19 with 2 fours. Rumana continued until required but due to a simple misunderstanding between Nigar Sultana and Rumana was run out leading to sheer frustration. Earlier, England Women posted competitive total of 153 for 7 despite wickets crumbling as Bangladesh showed tough competition with the help of Charlotte Edward’s first half-century of T20 Women’s World Cup 2016. READ: T20 Women’s World Cup 2016: Charlotte Edward’s knock helps England Women post 153 for 7 vs Bangladesh Women

Charlotte’s fifty came off from 46 deliveries including seven boundaries and a strike rate of 136. Bangladesh’s Jarhana Alam who gave the first breakthrough for England was worth the applause for her figures of 3 for 42. England Women are placed in Group B alongside Bangladesh Women, India Women, Bangladesh Women and Pakistan Women.

WOMAN OF THE MATCH (Charlotte Edwards) 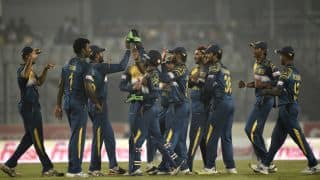