Australia beat Pakistan with ease and stay in contention to play in the semi-final of the ICC World T20 2016.

Mohali: Man of the Match James Faulkner on Friday said the secret of success for a bowler in the slam bang Twenty20 format lies in having good variation, execution of which can make life difficult for batsmen. Faulkner picked up five wickets to run through Pakistan batting line-up and ensure a comfortable win for Australia in a crucial ICC World T20 2016. “It’s pretty basic for all bowlers these days in T20 cricket. These days you got to have variation, change of pace, good yorkers and bouncer and if you can execute that you can make it hard for the batsman,” Faulkner said at the post-match press conference. He said the Aussies had to win today’s game to stay in contention. “At the end of day, we were trying to win, we got the desired result,” he said.  FULL CRICKET SCORECARD: Pakistan vs Australia, Match 26, Super 10 stage, ICC World T20 2016 at Mohali

Getting partnerships in the middle is always important, he said in reply to another question and heaped praise on skipper Steve Smith (61) and Shane Watson (44) for bailing the side out from 57 for three at one stage. “I thought Steve batted exceptionally well today, but that’s not surprised me, I have seen him play T20 cricket, obviously over here in particular with the IPL, he does it all the time, it was a class act today,” he said about the skipper’s innings.

About the role played by bowlers, Faulkner said that as a group they bowled well. “We knew they were going to come hard against us, it’s about holding our nerve,” he said. Faulkner also praised retiring player Shane Watson, saying his game was pure class.

Faulkner also recalled his association with Watson in the team, saying “we have spend a lot of time with Shane”. “He is very supporting with my cricket, and very supportive to young players, in general. He made you feel welcome in the group. He has been great for my cricket.” READ: James Faulkner’s 5-for help Australia knock Pakistan out of T20 World Cup 2016

About the match against India on Sunday, Faulkner said, “We got a massive game coming up against India, whoever wins that goes through. We will switch off from today’s game and focus on the upcoming game.”

“We have to make progress, if we didn’t make progress, we are out of the tournament. So, it was on our shoulders to turn the ship around and start winning. We have won two in a row, we need to win another three to win the World Cup.” He said that India is “a very good team” and Australia will have to play well to beat them.

About his on-field rivalry with India’s star batsman Virat Kohli, Faulkner said, “there is nothing going on there, it’s just friendly banter.” Asked if Australia would you like to have same kind of wicket against India, Faulkner replied, “I am not the curator, I am not sure what he is going to come up with. At the end of the day, it is same for both teams, we have to adapt, whatever it is, whether it has got pace, whether it is slow, we will soon find out.” 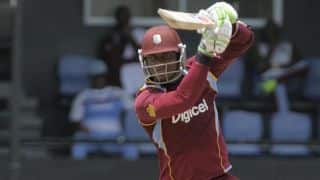