David Drew has never coached a blind cricket team in past.

David Drew has been given the mettle to coach Australian Blind Cricket team. Australian Blind Cricket Association (ABCA) picked Drew seeing his good performance over the past. Till recently Drew has been performing many jobs; he was working as the female high performance coach at Cricket Tasmania along with being Tasmanian Roar assistant coach. He was also the coach of Hobart Hurricanes and head coach for the Under 18 girls at the National Championships. Drew has never coached a cricket team for the blind but he is ready for the challenge. The challenge gets more tough owing to the fact that Australia have never won a Blind Cricket World Cup. READ: The heart-wrenching account of India s visually-challenged cricketers a team that won the T20 World Cup

In a conversation with abc.net.au Drew remarked, “It will be a real test of my coaching skills. It is something that I am very excited about and I am looking forward to learning new skills from the players and from the overall experience. I have been made to feel very welcome by all concerned at Blind Cricket Australia and I look forward to meeting and working with a fantastic group of athletes and administrators.” Blind cricket is a form of the sport which is suited for blind and partially blind cricketers. World Blind Cricket Council (WBCC) has governed it since 1996. South Africa, Pakistan and India have won Blind World Cups so far. India has also won the T20 Blind Cricket World Cup. In blind cricket ‘sweep shot’ is played quite often as it maximises the probability for the bat to make contact with the ball. READ: The heart-wrenching account of India s visually-challenged cricketers a team that won the T20 World Cup 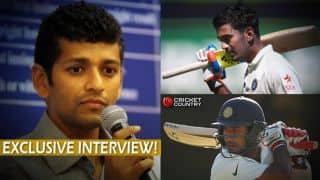 Shane Watson is a role model for kids: David Warner