With the the national selectors keeping close tabs on the leading run-getters of the ongoing 2018-19 Sheffield Shield, discarded wicketkeeper-batsman Matthew Wade and his Tasmania team-mate Alex Doolan have emerged among the front-runners for Australia s squad for the first Test against India starting December 6.

Wade, 30, has not played a Test for Australia since September 2017 with current captain Tim Paine a surprise recall later that year when England arrived for the Ashes. Wade was axed after averaging under 20 in 10 Tests since being called back in November 2016, and his return to Shield cricket began with scores of 1, 6, 9 and 17.

However, strong scores as the season continued, as well as a dominant start to the current one, have propelled him back into the reckoning as a specialist batsman. With 412 at an average of 82.50 after four matches, Wade sits at third in the list of most runs this Shield season behind Doolan (444 at 55.50) and Victorian Marcus Harris (437 at 87.40).

With Paine recently stating that the Shield s most prolific run-getters are seriously within reach of a spot in Australia s Test squad for the home summer opener, Wade and Doolan appear certain to be debated when the selectors meet soon.

There will always be tinkering but at the moment I feel pretty comfortable with my game, said Wade. (Since) before Christmas last year I’ve been hitting the ball well through that period. Even before that when I got dropped from the Australian team, I felt like I was hitting the ball well, I just wasn t getting weight of runs (at international level).”

Doolan, 32, played the last of his four Tests in 2014 and could find himself recalled ahead of Wade.

“People have started talking about it (national selection),” Doolan told reporters this weekend. “But ultimately, as top-order batsmen, we re judged on our hundreds’ column and I ve fallen short on that over the last two weeks. I m pleased with the way it s going. However, to get out last week in Sydney on 90 chasing the game, and again today in the 90s when we re setting up the game, is really disappointing personally.”

The first Test between Australia and India is from December at Adelaide Oval. 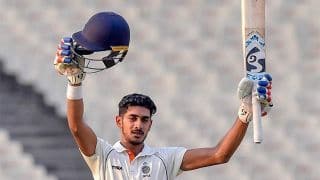