The team has been allowed to do away with the dress-code protocol and go overseas in casual attire.

In what comes as a huge relief for Indian cricketers, the Board of Control for Cricket in India (BCCI) has allowed them to travel overseas in casual attire and also in the business class section.

According to a report by The Indian Express, the team has been allowed to do away with the dress-code protocol and go overseas in casual attire. When the Indian cricketers landed in London on Sunday for their tour of England, they were dressed in t-shirts and track pants instead of blazers and formal trousers

“The BCCI has accepted the players’ request for avoiding blazers on long flights and instead allowing them to wear casuals. It does get very uncomfortable to wear formals, especially when they have to travel for more than 5-6 hours. So we have accepted their request. The players can wear their blazers for official functions or dinners later during the tour,” BCCI secretary Sanjay Patel said.

It has been learned that the players have informed the board that the team blazers will be carried by everyone and they will be donning them for official events and the format dinner with the High Commission of India.

In another development, the team will now fly overseas in business class section as far as possible. The board has allowed them to fly business class when the journey is of more than three hours. They will also be travelling to Sri Lanka and Bangladesh in business class henceforth.

Patel said, “Players now can fly on business class as far as possible. One should not forget that whatever BCCI has achieved is because of its players.” 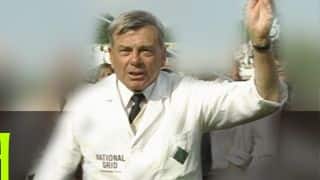