The participating teams will aim to give their best to qualify for division two.

Uganda finished second in the last edition of the league and captain Frank Nsubuga said his side is looking to win this year and gain promotion to Division 2.

“This tournament is a massive opportunity. We were obviously disappointed not to win the tournament last time round after a consistent run of victories. So we will be looking to do one better. We have just had a very good build-up tour in South Africa, playing tough games that helped us prepare for the tournament,” said Nsubuga.

Bermuda skipper Janeiro Tucker, whose team finished fourth in the division last year, said his team is motivated ahead of the competition. “The only objective is to qualify for Division 2 so we can try to set Bermuda cricket back where it belongs. The team has been training three times per week and trying to improve,” he said.

Singapore captain Saad Janjua said he is delighted by his side’s recent performance having gained promotion to Division 3 after earlier this year on home soil. “Our hard work has paid off. We planned and practiced hard for promotion and it has definitely helped the team’s morale,” he said, adding that new coach Mansoor Rana will provide an added dimension to the team.

“Rana is working hard with the team. His guidance and experience is helping us a lot in the preparations for big tournaments. He is tactically very good and is a big boost to the team. This tournament is very important for the profile of Singapore cricket. It is our dream to win Division 3. We will give our best shot.”

The eight-day tournament will see six teams — Uganda, Bermuda and Singapore, Nepal, Malaysia and the United States — face-off in a round robin format for a chance to finish in the top-2 and progress to WCL Division 2 which will be played in Namibia from Jan 17, 2015. 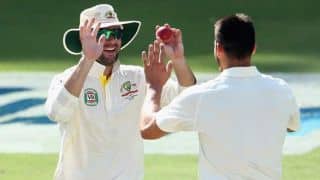