The International Cricket Council (ICC) has cleared Sri Lanka bowler Tharindu Kaushal to bowl off-spinners, but his doosras are still illegal and as a result is banned. Kaushal was reported for suspect action after India’s win over Sri Lanka in the third Test at Colombo. Kaushal underwent bowling clearance test at the Sri Ramachandra university in Chennai and his usual delivery, which are off-spinners were cleared. However, the officials found that his doosras were not bowled in accordance with the law, as they exceeded the -degree level of tolerance. Kaushal must therefore stick to his off-spinners and refrain himself from bowling the banned delivery to avoid further actions from the ICC officials. READ: Tharindu Kaushal reported for suspect bowling action

Kaushal can be reprimanded for bowling the doosras in international cricket again,  under the ICC Regulations for the Review of Bowlers Reported with Suspected Illegal Bowling Actions, according to icc-cricket.com. “The International Cricket Council (ICC) today announced that Sri Lanka’s Tharindu Kaushal is permitted to continue to bowl his stock delivery [off-break] in international cricket following an independent assessment of his action, which took place at the Sri Ramachandra University in Chennai earlier this month,” the ICC said in a statement.

Kaushal, who has picked up 24 wickets from six Tests since making his international debut in December, is allowed to continue bowling in international cricket until the test results are known. Acting on the recommendations of its cricket committee last year, the ICC has cracked down on suspect bowling actions, with off-spinners being the main target.

Rules drawn up in November 2004 state that an action is illegal when the bowler’s elbow straightens over the stipulated 15-degree arc in his delivery stride. The off-spinner’s googly — “the doosra” (“the other one”) which turns from leg to off — is believed to be targeted by umpires on the pretext that it is difficult to bowl one with a legal action. READ: Tharindu Kaushal must be given a longer run for Sri Lanka’s benefit

(With inputs from AFP and PTI) 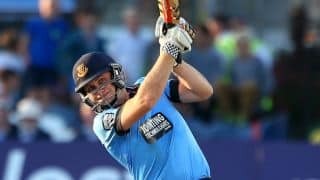