Tom Curran was added to England's Ashes squad on Tuesday after Steven Finn was ruled out of the tour to Australia with a knee injury.

Londres: Surrey seamer Tom Curran was added to England‘s Ashes squad on Tuesday after Steven Finn was ruled out of the tour to Australia with a knee injury. Finn, himself a late replacement for the absent Ben Stokes, has been diagnosed with torn cartilage in his left knee and will head back to England for a possible operation. Curran, 22, is next in line and the England and Wales Cricket Board has announced he will fly to Australia on Wednesday. A son of the late Zimbabwe all-rounder Kevin Curran, Tom has played a single one-day international and three Twenty20 internationals but is yet to make his Test debut. The Ashes 2017-18: Tom Curran to replace Steven Finn

He took 24 wickets at 34.66 for Surrey in the First Division of the County Championship last season, while averaging a useful 27.44 with the bat. His selection has seen Curran chosen ahead of two more experienced pace bowlers in Liam Plunkett and Mark Wood. Finn only made the current tour when he was added to the squad in place of the suspended Stokes, whose involvement remains in the balance as the ECB conduct an internal disciplinary inquiry and await the outcome of a police probe into his involvement in a brawl outside a Bristol nightclub on September 25.

Tuesday’s announcement ended another miserable tour of Australia for Finn, who suffered his injury when, after batting in the nets in Perth ahead of the first warm-up match, he hit himself while batting in the nets. The Middlesex quick was dropped midway through England’s victorious Ashes campaign of 2010/11 and left the previous 2013/14 trip under a cloud when then limited-overs coach Ashley Giles declared him “un-selectable”.

England coach Trevor Bayliss told reporters in Adelaide on Tuesday: “He [Finn] had an injection a couple of days ago which they thought would help.” But the ECB statement confirming Finn was out of the tour said he would “return to the UK in the next 48 hours where he will meet a knee specialist to ascertain whether he will have an operation”. The first Test between England and Australia starts at Brisbane on November 23. 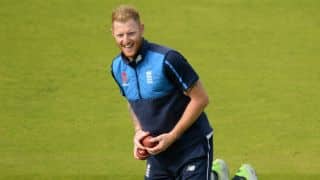