Burns was 125 not out after batting through the whole of Friday's second day of the first Ashes Test.

Rory Burns said maintaining faith in his distinctive batting style had been the key to a maiden Test hundred that left England well-placed in their Ashes opener against Australia at Edgbaston. Burns, whose innings commenced on Thursday, was 125 not out after batting through the whole of Friday’s second day of the first Test as England reached stumps on 267-4 in reply to Australia’s first-innings 284 – a deficit of just 17 runs.

England have long had problems at the top of the order and these only intensified when Alastair Cook, their all-time leading Test run-scorer, retired from international duty after following a fairytale century against India at the Oval last year. Doubts over whether Burns, who made his Test debut away to Sri Lanka in November, was the right man to fill Cook’s shoes intensified after he was twice out for six against Ireland at Lord’s last week.

The 28-year-old Surrey captain has several quirks as he prepares to face a ball, notably flicking his head to the right as the bowler runs in order to accomodate the effects of a dominant left eye. Following his double failure against Ireland, left-hander Burns’ unorthodox technique was picked apart by several pundits, but he refused to let the criticism get to him.

“I literally buried my head in the sand to all sorts comments, media that sort of stuff,” Burns, whose innings has now lasted nearly seven hours, told reporters after Friday’s close of play. “I just tried to get myself around people that back me – team-mates, coaches.”

Burns said the fact his first Test century had come in an Ashes match, and at a time when England were in desperate need of top-order runs following Australia star Steve Smith’s 144 on Thursday, made this innings all the more special.

“It’s quite hard to put into words, to be an Ashes cricketer in the first place is a wonderful thing,” he said. “We connected with some past players, some of the 2005 (England) winners the night before and I was literally ready to run through a brick wall at that stage and get right in amongst it.

“The night before I probably played my first ball a few times and probably celebrated a hundred a few times. To get over the line today is a wonderful feeling,” added Burns, who spent 36 balls in the 90s before a quick single off spinner Nathan Lyon saw him to three figures.

“But hopefully I’m not done yet and we can push on from the position we’re in tomorrow (Saturday).”

In common with many English cricketers before him, Burns spent time at a formative stage in his career in Australia and he said the advice he had received at an Adelaide academy run by former national team coach Darren Lehmann had been invaluable.

“The guy who heads it up there always used to say ‘find a way’ and that’s probably something that stood me in good stead throughout my career.”

Burns’ hundred drew praise from Australia batting great Steve Waugh. “His concentration was excellent,” said Waugh, now acting as mentor to the current Australia side. “He obviously knows his game really well and to get a hundred on that pitch is a really good performance in Ashes cricket.”

The former Australia captain added: “It was really important for his side so I give him full credit.” 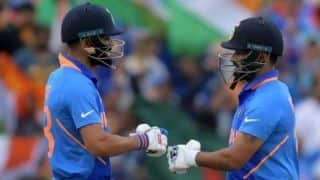