The Sri Lanka Cricket Board is once again planning about its T20 league which would be named Lanka Premier League in August.

The Sri Lanka Cricket Board is once again planning about its T20 league which would be named Lanka Premier League in August. SLC president, Thilanga Sumathipala wants Indian players who do not fall under BCCI contract to play in the league to attract the crowd.

In an interaction with The Indian Express Sumathipala talks about the talent India players have. He also mentions how Sri Lanka allows players to participate in leagues and wants India to do the same.

100 of talented players in India

“We would like BCCI to allow players who are outside the 30 contracted players list to play. I m making my appeal to the BCCI. I can understand the contracted top players playing for the country should be protected and there are 100 of talented players in India. They have time after IPL. We are 20 million but we allow our players to play outside. I think Indian players should allow player outside their top 30.”

Sumathipala agrees with BCCI decision of not allowing their star players to participate in leagues, but is of the opinion that players who do not play for the nation or retired players will grab eyeballs if allowed to play.

It s a fairly big load

“In fairness to the BCCI, India s top players will have to play all formats. It s a fairly big load. So you can t allow them to play elsewhere. My position is if they say these are my top 30-40 players , it s fine, but there will be players who would have played 5-6 ODIs and not playing now, you are depriving them of opportunities, especially when there is no cricket in India. ”

“And there are players who have retired. Look at a player like Shahid Afridi. Even at 50, people will like to see him play because he is an icon in Pakistan.”

Sumathipala also talked about how Indo-Pak relationship impacted smaller Asian boards. He believes the two nations should play in the spirit of the game.

“I think India and Pakistan must play in everyone s interest. I can understand the sensitivity of both the countries. Its nothing new, such things have happened time again and again at various sports; not only India and Pakistan. There will be visa issues.

But stopping them from playing is the problem. In the spirit of the game you have to go and play. If you can t play in Pakistan go to Dubai, if you can t play in India, go to Bangladesh or Colombo. It is important to continue the fixtures because politically and culturally if you keep playing then society wants them to play at home”

Sri Lanka is currently hosting Nidahas Trophy a T20I tri-series between India and Bangladesh. The tournament is held on the celebration of 70 years of Independence. 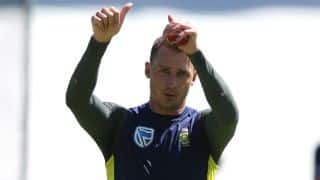