Australia could not get Virender Sehwag out that day. He had to do it himself

The Boxing Day Test match is one of the most eagerly anticipated event in Australia as a New Year approaches. It isn t the Australian cricketers alone who are honoured to play the game, but players from around the globe are in awe of the occasion at the iconic MCG. The atmosphere in the huge coliseum can be very unnerving and intimidating. However, the enormity of the situation or its significance doesn t matter to a certain Virender Sehwag and he showed why on Boxing Day in 2003.

Led by the inspirational Sourav Ganguly, India had played beyond expectation on their 2003-04 tour to Australia. No one had expected them to take the fight to Steve Waugh s Australians in their own den. Going into the third Test at Melbourne, India were leading 1-0 after a brilliant victory at Adelaide. The momentum was with India and Australia were the side under pressure.

On a batting beauty at the MCG, Ganguly won the toss and elected to bat first. Virender Sehwag and Aakash Chopra had been good at the top and India needed them to provide another good start. In fact, Sehwag had shown glimpses of his belligerence in the two previous Tests, but he needed to carry on to make a big impact. Assessing the conditions at Melbourne, the opener decided to tweak his approach and was circumspect in the first hour much like his partner Chopra.

The pitch had something in it for the bowlers and Brett Lee rapped Sehwag on the helmet with a scorching bouncer. He also had a close call when he guided a rising delivery from Nathan Bracken through the slip cordon. It could have easily gone to one of the men standing in the vicinity. Another chance flew past backward point, even as the Australians wondered what might have been.

In the first 20 overs, India moved to 42 for no loss with Sehwag on 24 off 59 deliveries. A batsman like him cannot be kept quiet for too long and Sehwag took it to the bowlers once Stuart MacGill, the leg-spinner, was introduced into the attack. The Delhi dasher welcomed MacGill to the attack by smashing him for a huge six over long-off.

With his eye in, Sehwag unleashed an array of strokes. MCG stood up and applauded his brilliance as the Australian fielders were reduced to mere spectators. He brought up his fifty with a powerful cut over point and that was the start of his attack. With his typical hand-eye coordination, he dispatched everything in his zone to the boundary. If he was full, he would flay his bat to hit it through the off side and if it was a touch shorter, he would stand tall to cut it.

The huge boundaries at the MCG were no match to Sehwag s incredible power as he lofted MacGill nonchalantly. Chopra was going steady at the other end, but was dismissed with the score on 141. That didn t deter Sehwag as he continued his merry ways. He brought up his hundred with a flick to the mid-wicket boundary and celebrated his ton with genuine delight. Did someone say he didn t have the footwork to succeed on foreign pitches?

Even after he got the milestone, Sehwag continued to toy with the Australian bowling. MacGill continued to suffer as Sehwag now targeted the on-side. Steve Waugh introduced himself into the attack and bowled his gentle medium pace. Sehwag carted a slower delivery off him over long-off for another six. MCG started looking smaller and smaller with each passing hit.

During the knock, he got his 50, 100 and 150 with boundaries. He has often said that he doesn t bother if he is on zero or 99, if it is in his zone, he would go after it. That is exactly what he did that day. However, with such an approach, he lives by the sword and dies by it. On 189, he got a juicy full-toss off Simon Katich and he smashed it with all his power over long-off for a massive six. The next delivery was also a full-toss and Sehwag went after it again only to be caught at long-on.

With five runs to go for a memorable Boxing Day double, Sehwag lost his wicket while backing his instincts. Sanity would have dictated him to turn the strike around and look for singles, but that is Sehwag for you. John Wright wrote in his book Indian Summers, I sometimes wish he d pick the part of the ground where he didn t have to clear a fielder, but then again Viru doesn t clutter his mind by worrying about where the fielders are.

It was the dismissal Australia were looking for and the India batting collapsed with Sehwag gone. He was out when India were 311 for 3 and they were eventually bundled out for 366. Many critics targeted Sehwag for his indiscretion. However, Wright wrote, A lot of critics, though, pointed the finger at Sehwag; they d reckoned he d thrown it away because he got caught in the deep trying to hit part-timer Simon Katich was six. I guess that s one way of looking at it; another is that he didn t get to 195 before tea by pushing slow full tosses for a single.

However, the most interesting anecdote Wright recalls in his book is a comment by Mark Taylor on television. Wright recalls Taylor saying, An opener shouldn t get 190 before tea on the first day. That s just rude.

With Sehwag dominating, it looked like India s game, but Australia seized control after they were given a sniff. Ricky Ponting smashed 257 to take Australia to 558. India fought hard in the second innings with Rahul Dravid and Ganguly leading the way. That wasn t enough as India were bowled out for 286 and Australia won the game comfortably by chasing own the target of 95.

Sehwag s 195 was just a glimpse of what was to come. A few months down the line he became the first Indian to score a triple century in Test cricket. That was the first sign of Sehwag hunger for big scores in Test cricket and he hasn t looked back since. 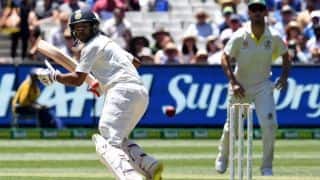