Sri Lanka introduced tough penalties for match-fixing and tightened sports betting restrictions in November in a bid to stamp out graft that has tainted the country's cricket team.

Sri Lanka Sports Minister Dullas Alahapperuma has claimed that the International Cricket Council (ICC) is carrying out investigations into three cricketers from the nation on charges of match-fixing or corruption. Sri Lanka Cricket did not name the targets of the probe by the ICC’s Anti-Corruption Unit but insisted no current national players were involved.

The reports said Alahapperuma had hinted current players were being investigated by the ICC for match-fixing.

“What the honourable minister actually mentioned was about an investigation launched by the ICC Anti-Corruption Unit against three former Sri Lanka players and not the current national players,” the board said in a statement.

The ICC said it would not comment on any active investigation.

Sri Lanka introduced tough penalties for match-fixing and tightened sports betting restrictions in November in a bid to stamp out graft that has tainted the country’s cricket team.

Allegations of corruption included claims of match-fixing ahead of a 2018 Test against England.

However, Sri Lanka Cricket insisted no current players were involved in the ICC investigation.

Commenting on the drug charge faced by fast bowler Shehan Madushanka, Alahapperuma said “it was sad and the country had placed high hopes on him”.

Alahapperuma said the government would soon focus on the dropping standards of cricket at the school level. It has come to light that schools are no longer producing quality players.

At a recent meeting with Prime Minister Mahinda Rajapaksa, greats such as Mahela Jayawardene, Kumar 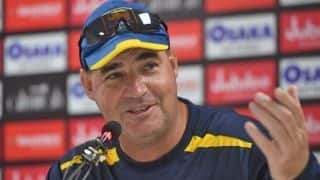