Recently retired Tillakaratne Dilshan opens up about former and current players not supporting him while his captaincy tenure. Dilshan also mentioned that he did not get sufficient backing during his short captaincy stint with Sri Lanka. Dilshan played his last ODI yesterday against Australia at home. Dilshan was respected with ‘Guard of Honour’ on his final ODI, he scored 42 from 65 balls yesterday at Dambulla International Stadium. Dilshan captained the Sri Lankan side for 10 months in 2011-12 period. He also expressed his disappointment on getting sacked after South Africa tour in 2012. He was given the load of captaincy in 2011 after Mahela Jayawardene’s and Kumar Sangakkara stepped down from the post. ALSO READ: Tillakaratne Dilshan: 10 best ODI knocks of the Sri Lanka legend

Dilshan had a lot to say about his captaincy period, he told ESPNcricinfo, “I didn’t actually plan to take the captaincy, but the SLC president asked me to take over for six months until we find someone else. Unfortunately, we had also lost two bowlers. Murali [Muttiah Muralitharan] had retired. Nuwan Kulasekara was injured. Ajantha Mendis was injured. I didn’t have great resources. Angelo Mathews had a calf injury for a year that stopped him from bowling. That must be because of my misfortune, because after I had stepped down, we went to Australia after a week. In that week, Mathews started bowling. That must be because of Mahela’s good fortune.”

Mathews could not deliver with the ball during Dilshan’s tenure as he bowled in only 12 out of 16 innings in Tests and 9 out of 20 ODIs. Mathews was not fully fit due to calf injury and could not bowl more than 5 overs per match that hampered with Sri Lanka’s performance and team balance.

Dilshan was hurt by the proceedings but decided to focus rather on his performance. “At the end of that South Africa series, I put everything aside. I went to Australia, scored 500 runs, and became Man of the Series. It didn’t matter to me who was captain. I wasn’t concerned about who ousted me as captain. I always play for my country. I didn’t worry about those personal things, but I was hurt.”

Dilshan also revealed the unwillingness of players on leading the Sri Lankan side. He said, “There actually wasn’t anyone who was willing to be captain. Everyone resigned after the 2011 World Cup. In England a ball hit my hand and I broke my finger, and the former captains were asked to lead, and they said no. After that only when it was talked about that someone like Sanath Jayasuriya or Thilina Kandamby be made captain that someone presented himself to be captain. But I guess there’s no point talking about those past things anymore. But I am proud that it is players that I brought into the team at the time who are winning matches now. About six or seven of the players today are cricketers who I’d given a chance to. At the time it was a problem for me, because people asked me why I was giving young players so many opportunities. But today, we should look at players like Dinesh Chandimal.”

Dilshan felt good about the fact that the players he took forward during his captaincy are performing well now. Dilshan will be retiring from all international formats after the T20 series. He said, “I hadn’t planned to retire, before the series,” he said. “Whether someone tells me to keep playing or stop playing, that’s not what’s important. What is important is what I feel. I started the series thinking that I’ll play for another year – at least in T20 cricket. But when I woke up on the 25th I felt that it was time to go. To be honest I could easily play for another year or two. But we have to look to the future. If I play for another two years and leave, there’s only 18 months before the next World Cup and that’s unfair to the team. A young player could be blooded in that time. Since I started opening six years ago, we haven’t found a permanent partner for me. I’ve opened with about 10 people – so that’s a problematic area for us. If I keep playing we won’t be able to get two batsmen settled in that place. I’ll be able to get some rest.” 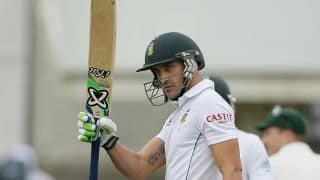