Tim Bresnan will rejoin England‘s Ashes squad after an encouraging performance in his first game back from a stress fracture in his back.

The Yorkshire paceman helped to defend 18 runs from the last six overs as the England Performance Programme played out a thrilling draw with Queensland Second XI at Brisbane’s Allan Border Field on Friday.

Chasing an improbable 422 to win, the hosts got close thanks in part to 100 from opening batsman Joe Burns.

The Queensland second-stringers had three wickets left going into the closing overs, but came up eight runs short.

Bresnan, although wicketless in the second innings, used his experience to be the EPP’s most economical bowler, conceding just 41 runs off his 16 overs including five maidens.

It was the bowling all-rounder’s first game since suffering a stress fracture of the lower back in August.

Bresnan, who hit 57 not out and took 4-31 in the first innings, will now rejoin the Ashes squad as he bids to play in next week’s second Test at Adelaide.

Bresnan’s return could be a bonus for England, whose third seamer Chris Tremlett failed to impress in the heavy first Test loss to Australia.

Bresnan, who has taken 67 Test wickets, was diagnosed with a stress fracture in his lower back after England beat Australia in Durham during the recent Ashes 3-0 series win. 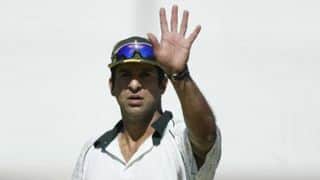 Wasim Akram to be honoured for fight against diabetes