Kanpur: Apple Inc CEO Tim Cook was floored by his first IPL experience when he turned up to watch Gujarat Lions (GL) take on Kolkata Knight Riders (KKR) in a key game on Thursday. “It is incredible. I am already hooked on to it,” said Cook during a brief chat aired by the host broadcaster during the KKR innings. Cook came to watch the game in sweltering heat but he was not complaining much. “It is tough to watch the game in this heat but I have never felt anything like this before. I see how important cricket is, how important sport is. India is hugely important. It is a great market place. India has an incredible future ahead. I am very optimistic,” added the CEO as IPL Chairman Rajeev Shukla stood beside him. LIVE CRICKET SCORECARD: Gujarat Lions vs Kolkata Knight Riders, IPL 2016 Match 51 at Kanpur

“It is a great achievement for us that he has come all the way to watch the game. We are using his [Apple’s] technology even in our domestic cricket,” said Shukla. Cook, who is touring India, came here this evening on the invitation from Shukla. He was seen enjoying the game while sitting alongside Shukla and Sanjay Dutt, who was recently released from prison. IPL 2016, GL vs KKR: Rajeev Shukla, Sanjay Dutt, Apple CEO Tim Cook enjoy match

The Apple CEO is on a four-day visit to India where he is expected to meet a host of political leaders, industrialists and celebrities. The 55-year-old Cook landed in Mumbai and paid a visit to the famous Siddhivinayak Temple. Last night, he had also dropped in at a private party organised by Bollywood superstar Shah Rukh Khan, who is also the owner of Kolkata Knight Riders. A lot of excitement was evident at the Green Park Stadium which hosted an IPL game for the first time. It was also the first time that a game was played under lights here. 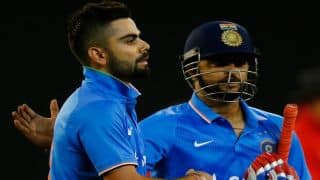