Murtagh took five wickets for 13 runs in nine overs as Ireland made a sensational start to the Lord's Test.

The 37-year-old Murtagh, who plays at Lord’s for Middlesex, finished with five wickets for 13 runs in nine overs after England captain Joe Root had won the toss. Only three England batsmen made it into double figures – Joe Denly (23), Olly Stone (19) and Sam Curran (18) – in an innings that was finished inside 24 overs.\

But of those only Denly is a top-order batsman, with fast bowler Stone making his Test debut. This was the fourth time in 34 Tests that England had lost all 10 wickets in a session – a worrying sign ahead of next week’s start of the Ashes – with Bangladesh at Mirpur in 2016, New Zealand at Auckland in 2018 and India at Nottingham, also in 2018, the other three instances.

“I’m not quite sure what’s happened in the last two hours,” an elated Murtagh told Sky Sports during the lunch interval. “It’s a dream just to play here in the first place. But to get on the honours board… It’s a fantastic first session for us.

“Everything felt really good today. The ball came out nicely and it did a little bit off the wicket. I should know how to bowl on this ground — I’ve been here long enough,” added Murtagh, a Middlesex player for over a decade after starting his career across London at Surrey.

England’s collapse followed their 77 all out away to the West Indies in Barbados in January. This Test was only scheduled for a maximum of four days rather than the usual five but at this rate there was no danger of the match petering out into a draw.

On a ground where they won the World Cup just over a week ago, England were soon in deep trouble despite Root’s insistence they did not want to “sleepwalk” into this match. A green-tinged pitch promised to offer Ireland’s seamers some assistance but few could have foreseen the flurry of England wickets that followed, with Jonny Bairstow, Moeen Ali and Chris Woakes all out for nought on a sunny day.

Test debutant Jason Roy, fresh from his World Cup heroics and the latest batsman to be given a chance at filling England’s problem position of Test opener, fell for five when the admirable Murtagh, far from express pace but remorselessly attacking the top of off stump, squared him up with Paul Stirling holding the ensuing edge low down at first slip.

Mark Adair (3-32) might have had Roy lbw for five if he had not bowled a no-ball but the debutant soon had his first Test wicket when Denly was lbw. Rory Burns saw his first Test innings on home soil end on six when he nicked medium-pacer Murtagh low to wicketkeeper Gary Wilson, with England now 36-3.

Adair then captured the prize wicket of Root, plumb lbw for two to a ball that would have hit middle stump. When Jonny Bairstow was bowled for a duck off an inside edge by Murtagh as he attempted a booming drive, England were 42-5. Woakes then became Murtagh’s fourth victim, lbw on umpire’s call before the veteran seamer ensured he would have a place on the honours board for all those who take five wickets in a Test innings at Lord’s when he had Moeen caught behind.

Stone stylishly drove three fours in four balls of Stuart Thompson before he was bowled by Adair to end a stunning morning’s play. 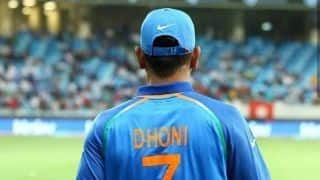