Chasing 172 for victory, RTW made a late charge and ended up on the same score as their rivals 171-5. In the Super Over, RTW made 11 runs with Vijay scoring all the runs off pacer Sunil Sam. Anirudha didn t leave any doubts of who was going to be the winner of the match by carting two sixes off left-arm spinner Sai Kishore off the first two balls he faced to log a thrilling win for his team.

For 34 overs of the 40-over contest, iDKK were in control of the proceedings until Murali Vijay nearly stole the thunder from them.

Dropped when he was on five by R Rajkumar off pacer V Laxman with the RTW score reading 6-0 in the second over, Vijay made the erring fielder pay heavily for his lapse. In the first 14 overs, the India opener appeared content in keeping the scoreboard ticking, not hitting a boundary while scoring 31 off 38 balls. But off the next 18 balls he clobbered 50 runs, including seven fours and three sixes.

With RTW needing another 78 runs from 30 balls, Vijay simply waded into the attack meting out some special treatment to medium-pacer Rajkumar clattering two sixes and a four to collect 20 runs in the 15thover. In the 17thover bowled by Sunil Sam, the 35-year-old international belted four fours to gather 18 runs. He continued his belligerent mood against Rajkumar plucking two fours and six for 15 runs in the over.

With the equation down to 20 runs from 12 balls, Vijay holed out in the deep off Sunil Sam for a superb 81 off 56 balls. Ganapati Chandrasekar (21 off 17 balls), wicketkeeper Mani Bharathy (7 not out off 2 balls) and Sai Kishore (7 not out off 6 balls) kept RTW in the hunt they could only force a tie.

It was the fourth tie in the history of the league and first of the season.

Anirudha was content with the total iDKK had put on the board but his only worry at the break was Murali Vijay. His worst fears were to come true as Vijay nearly took the game away from them.

Yo Mahesh and me were having a talk during the break and I was telling him that we are there half-way but the only player I fear is Murali Vijay because if he gets going it would be very difficult for us. When Vijay started going I was very calm because I realised when a batsman of his calibre gets going we can’t do much. You can only bowl in good areas but he has the ability to play every shot and you just have to hope for the best. I kept having a little chirp with him saying that if he gets out its over, he said.

While Anirudha ended up on the winning it was Vijay who stole the show. The India player who was playing for Ruby Trichy Warriors for the first time after being traded this season from Lyca Kovai Kings felt they were unlucky to fall short.

The Super over is always a tricky situation for any team because you can’t decide on what the target should be. I thought 15 or 16 runs would be really good to put pressure on but again it didn’t happen as we were a couple of runs short, he said.

I thought our bowlers should’ve executed the plans a little better but again it s a new tournament for them and as senior cricketers we have got to encourage them and instil in them the right mindset, he said.

Earlier, Anirudha struck a calculated 58 off 36 balls (7 fours, 3 sixes) to spur Karaikudi to an impressive 171-5 in 20 overs. After a sedate start, the 32-year-old opener went after the bowling by smacking a six each off pacer M Poyamozhi and left-arm spinner K Vignesh. He hit 34 runs between the 9th and 12th overs to power the Karaikudi innings before being bowled by rival captain and left-arm spinner Sai Kishore.

Anirudha was also involved in the highest partnership of the innings – 57 runs off 37 balls – with R Srinivasan (37 not out off 32 balls, 1 four, two sixes) with his contribution being a whopping 43 runs.

With the 34-year-old Srinivasan holding firm at one end, all-rounders Maan K Bafna (30 off 21 balls, 2 fours, 2 sixes) and R Rajkumar (28 not out off 13 balls, 1 four, three sixes) made merry. After scoring 68 in the first 10 overs, the iDKK batsmen scored 103 in the remaining 10 smashing eight sixes and five fours during that assault. Overall, they hit 10 fours and 13 sixes in the innings.

Debutant medium-pacer Sarvana Kumar, 27, was the most successful bowler for Ruby Trichy Warriors claiming three wickets for 42 runs while captain Sai Kishore was the most economical conceding 26 runs from his four overs and picking the prized scalp of his opposite number. 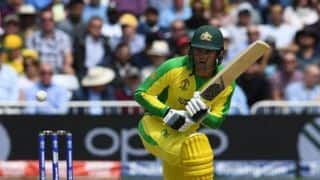