Smriti Mandhana says she controlled herself from playing any rash shot on her way to a match-winning century.

Smriti Mandhana, star of India women‘s dominating win against New Zealand in the first ODI on Thursday, has said she controlled herself from playing any rash shot and instead concentrate on singles and doubles. (ALSO READ: Mandhana’s form gives us a lot of confidence Raj)

The strategy paid rich dividends as Mandhana went on to score 105 off 104 deliveries her fourth ODI century that setup a nine-wicket win with India chasing down 193 in 33 overs. With Jemimah Rodrigues, who scored a maiden ODI fifty to remain unbeaten on 81, the she added 190 runs for the first wicket.

Mandhana, the ICC Women cricketer of the year, fell with India needing just three runs to seal the win. “[I’m] really happy,” she said after the match. “I have a thing of getting out in the 70s and 80s, so I had to talk to myself, ‘don’t hit any rash shots, don’t hit any lofted shots, just play in singles and doubles’. I’m really happy with that aspect. I was able to stick in and guide the team through. Again, if I’d scored three runs I would have been a lot happier.”

New Zealand threw away a solid start to be bowled out for 192 in 48.4 overs. Their openers built a 61-run stand, but then Indian spinners took over with the trio of Ekta Bisht (3/32), Poonam Yadav (3/42) and Deepti Sharma (2/27) running through their batting line-up.

Mandhana said the pitch was batting friendly, but their plan was to play the ball as per the merit. “The wicket was really good to bat on, and initially we just played according to the merit of the ball. We just had to react to the ball, because they had good pacers,” she said.

She continued, “The plan was to see how the new ball was doing. This was the first time we were batting in New Zealand, and we didn’t really know we watched a bit of the men’s match and also how the first innings went. So we decided to just keep it simple, play according to the merit of the ball.” 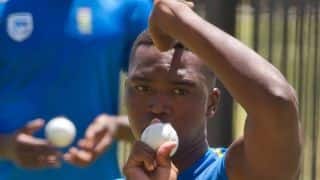