Greatbatch opened in the 1992 tournament with Latham's father Rod.

Former New Zealand cricketer Mark Greatbatch has said that Tom Latham‘s Test success is no fluke and he should bat at the top of the squad’s ODI order in the Cricket World Cup.

Greatbatch opened in the 1992 tournament with Latham’s father Rod. He knows the Latham family well, has followed Tom’s career and believes his technique, temperament and ability all suggest he should open in the tournament in February and March.

Greatbatch flew to Christchurch to be part of the Cricket World Cup trophy tour, at Burwood Park on Saturday, and thinks that the son of his old opening partner turned golf buddy would continue his fine Test form if he opened in the ODIs, Stuff.co.nz reported.

Jimmy Neesham and Martin Guptill did the job in the first two ODIs against South Africa last month but Greatbatch isn’t sure Neesham is the answer.

He said that Neesham is a good player but he is not convinced that he’s an opener . He added that it’s very tough to go from the middle order, or lower middle order really, to the top.

Greatbatch said that Latham has shown in Tests and throughout his young international career that he has a sound defence but he also believed that the Canterbury batsman could score all around the ground and at a quick enough pace.

Greatbatch said that his vote would be for a guy that can play pretty well against the new ball and use the pace of it square of the wicket but also score down the ground like Latham can.

He said that Latham has got a good defence, good balance and he moves well. Technically, Greatbatch said that Latham was superb and had found the difficult balance between having a solid technique while remaining comfortable and free. 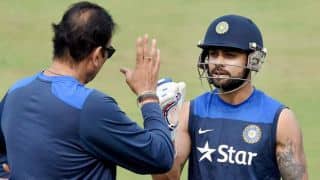