He is also the current coach of New South Wales (NSW).

The England and Wales Cricket Board (ECB) today appointed Trevor Bayliss as the new head coach for England. He is currently the coach of New South Wales (NSW) and would join the English team by next month, reports ecb.co.uk.

ECB Director, Andrew Strauss said, “”Trevor has an outstanding record as coach, has global experience and is very highly regarded in the game. He has proved himself in both domestic and international cricket, has a strong reputation for man-management and has shown how to build winning teams in all three formats.” Kolkata Knight Riders’ (KKR) coach Trevor Bayliss to take up England job

“His expertise in the shorter forms of the game will be vital as we build towards three major ICC events over the next four years; the ICC World T20 tournament in India in 2016 and the ICC Champions Trophy and ICC Cricket World Cup which will be staged in England and Wales in 2017 and 2019 respectively,” he added.

“Trevor will also work well with Paul Farbrace, an exceptional coach who will continue as Assistant Coach after helping us to an outstanding victory over New Zealand in the 1st Investec Test of the summer. This has been a very competitive recruitment process and we’re grateful to all of the candidates who showed their interest in this role. I’m excited to have him on board,” he also said.

Bayliss expressed his reaction saying, ““It’s an honour to be appointed England Coach. There’s a great opportunity to help Alastair Cook and Eoin Morgan shape the direction and development of their respective teams. I am also looking forward to working  alongside Paul Farbrace once again as we have a similar outlook on the game, get on well after two years working together and have kept in touch.”

Bayliss has had a brilliant record as the head coach of several teams, including leading Sri Lanka to final in ICC Cricket World Cup 2011, ICC World T20 in 2009 and also helping them reach second spot in ICC World Test rankings. He has also led Kolkata Knight Riders (KKR) to their twin IPL titles in 2012 and 2014 and also won Big Bash League (BBL) and Champions League T20 (CLT20) with Sydney Sixers in 2012.

Bayliss has also played 58 First-Class matches with New South Wales within 1985 to 1993, and also won the Sheffield Shield with NSW during his first reign as their head coach. Pakistan steady their ship against Zimbabwe in 1st ODI at Lahore 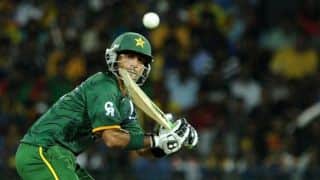 Pakistan in control against Zimbabwe in 1st ODI at Lahore