The pendulum swung from one to another, and in the end, it was South Africa A, who got the better of India A as they managed to sneak in a victory by 2 wickets.

The tri-series between India A, South Africa A and Afghanistan A kicked off today at Pretoria with the hosts taking on India A. Although it was a low-scoring contest, there was plenty of excitement throughout the match. The pendulum swung from one side to the other; South Africa A prevailed in the end, managing to sneak in a victory by 2 wickets.

South Africa A captain Khaya Zondo won the toss and elected to bowl first. Beuran Hendricks gave a double blow to India A in the second over, sending Sanju Samson and Shreyas Iyer back. After suffering the early jolts, the resurrection job was done by Karun Nair and Manish Pandey, who added 42 runs for the third wicket. Just when the partnership was looking good from the Indian point of view, Dwaine Pretorius caught Nair plumb in front and provided South Africa A with an important breakthrough. Rishabh Pant and Krunal Pandya soon followed, and from 49 for 2, India slipped down to 65 for 5 in a space of 7 overs.

Aaron Phangiso and Pretorius bowled impressively: not only did they get breakthroughs, but they also kept things tight by bowling nagging line and lengths. At the end of 25 overs, India A had only managed to score 79. The only positive thing for them was that Pandey was still out there, on 27. Pandey batted according to the situation and scored a valuable 55, before getting stumped off the bowling of Phangiso. Phangiso cleaned up Shardul Thakur in the same over, reducing India to 127 for 8.

Pretorius bowled Basil Thampi in the next over. In the end, India A somehow managed to cross the 150-run mark, thanks to a handy knock of 24 down the order from Yuzvendra Chahal.

The target of 153 was certainly not daunting, but just like India A, South Africa A lost a couple of wickets early as well. This was followed by 3 successive maidens as the Indians kept things tight for the first 7 overs.

After the lunch break, Reeza Hendricks and Heinrich Klaasen broke the shackles. They smashed a few boundaries and accumulated 25 runs in 12 balls. However, their show was short-lived as Thampi cleaned up Hendricks on his very first ball. Pandey then brought in the Akshar Patel, his left-arm spinner, into the attack. Akshar he picked up 2 wickets in 2 overs to get half the South African side back in the pavilion.

At this stage, South Africa were in some spot of bother and desperately needed a partnership to claw their way back in the game. It was the pair of Farhaan Behardien and Pretorius that did the job for their team; they stitched a match-winning partnership of 62 and took the match away from India A.

Though Yuzvendra Chahal managed to pick up 3 wickets at the end, they were not enough to help India A to turn the match in their favour. Behardien stood tall and scored an unbeaten 37 to guide his team home. 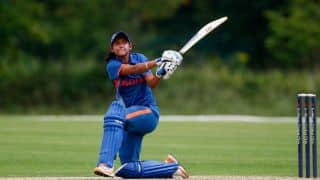