Despite Dinesh Chandimal's half century, debutants Ruhunu were done in by five run outs as they were bowled out for 138 in their inaugural Champions League T20 qualifier against Trinidad and Tobago. 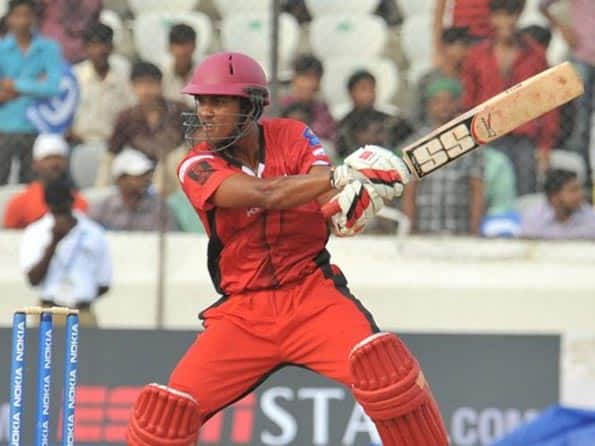 Dinesh Chandimal in action during his knock of 48 AFP

Despite Dinesh Chandimal’s half century, debutants Ruhunu were done in by five run outs as they were bowled out for 138 in their inaugural Champions League T20 qualifier against Trinidad and Tobago.

Chandimal (50) revived the team after a top-order collapse which saw them tottering at 26 for three at one stage, but lack of discretion on their part towards the end undid the batsman’s good work.

Chandimal struck two fours and equal number of sixes in his 48-ball stay, and was ably supported by Janaka Gunaratne (20) as the duo put on 67 for the fourth wicket.

But the Sri Lankan domestic side’s lack of international experience came to fore as five of their batsmen ran themselves out. From 132 for six, they slumped to 138 all out.

Ruhunu captain Mahela Udawatte’s decision to bat after winning the toss on a green-top backfired as they lost three wickets, including Sanath Jayasuriya, inside the fourth over.

While Jayasuriya was trapped by Badree, Udawatte ran himself out as Adrian Barath’s quick throw found him well short of the crease.

Their miseries were further compounded when Milinda Siriwardana (1) took off for a non-existent single, resulting in another run-out.

Chandimal and Gunaratne then played cautiously while keeping the scoreboard tickling with occasional boundaries.

However, as they were settling into a nice position, Gunaratne was bowled by Kevon Cooper, and Chandimal was caught by Rampaul off his own bowling.

After the fall of both the batsmen, Ruhunu’s lower-order failed to put up any resistance.

For Trinidad, Rampaul was the most successful bowler picking up two wickets for 17 runs. (PTI)