India's miserable tour of England ended without a win as the home side spanked them by six wickets under Duckworth-Lewis method in the rain-affected fifth and final One-Dayer with Rahul Dravid finishing his illustrious ODI career on a losing side. 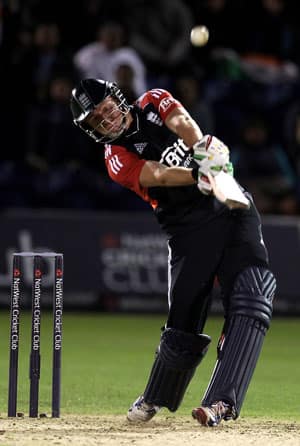 India’s miserable tour of England ended without a win as the home side spanked them by six wickets under Duckworth-Lewis method in the rain-affected fifth and final One-Dayer with Rahul Dravid finishing his illustrious ODI career on a losing side.

Put into bat, India rode on a fluent century from Virat Kohli (107) and substantial contributions from Dravid (69) and captain Mahendra Singh Dhoni (50 not out) to post an impressive 304 for six on a batting friendly Sophia Gardens pitch.

Chasing the challenging target and their innings interrupted by intermittent rain, England stuttered to 166 for four in the 26th over but recovered to race to the revised target of 241 with 10 balls to spare with Jonathan Trott (63) and captain Alastair Cook (50) being the main contributors.

Debutant Jonny Bairstow and Ravi Bopara, who knocked off the winning runs, also chipped in with unbeaten knocks of 41 and 37 respectively.

With the loss, India had to return home without any win in the disastrous tour. They were whitewashed 0-4 in the four-match Test series, beaten in the one-off Twenty20 International before ending the tour by losing the five-match ODI series 0-3.

The disappointing performance, one of the worst ever, meant that India will slip to fifth position ti ICC ODI rankings while England will be a rung above.

England made merry on India’s misery as besides the toothless attack, the wet outfield also did not help whatever was left of India’s bowling.

Before the first rain interruption came during their innings, England had lost opener Craig Kieswetter for 21, lbw to Vinay Kumar, after the hard-hitting opener had faced only 17 balls and hit four fours.

Cook and Trott then built a 79-run stand for the second wicket off 82 balls between another rain-interruption before the former was bowled by Virat Kohli. A ball before, Cook was let off by Rahul Dravid at short fine leg.

The left-arm spin of Ravinder Jadeja was a cannon to fodder for the two batsmen as they took 21 runs in his fourth over, Bell hitting two and Trott helping himself to one six.

India appeared to have got back into the game when they picked out Bell and Trott within a space of six runs. Bell hit out straight to long-off after making 26 off 21 balls with two sixes and Trott hit straight to point-cover, scoring 63 off 60 balls with three fours and two sixes.

But debutant Jonathan Bairstow made it a cakewalk for England with some stunning shots. The youngster was almost savage in his attack and showed no nerves in smashing 41 runs off 21 balls with one four and three sixes.

Even though his partner Ravi Bopara was not a slouch himself, scoring 37 runs off 22 balls, it was Bairstow’s brutality which broke Indians’ spirit. The two put on 75 runs for the unseparated fifth wicket off only 40 balls.

Earlier, Kohli slammed a fluent century and Dravid made his final One-Day innings count with a solid 69 as India posted an impressive 304 for six after being put in to bat.

Kohli (107) and Dravid led India’s batting charge with a 170-run stand for the third wicket off 160 balls and captain Mahendra Singh Dhoni (50 not out off 26 balls) turned the heat with a blistering unbeaten half century in the final overs to take the visitors’ score past 300 at Sophia Gardens.

This is Kohli’s sixth ODI century from 64 matches while for Dravid it was his 83rd half century in his 344th and final match in the shorter format of the game.

The day began on a familiar note with Indian skipper Dhoni once again calling the coin wrongly and the visitors were once again put in to bat.

The start of the Indian innings was also on familiar lines as was the rain interruption which came bang before the players came on to the field, causing a 40-minute delay.

Parthiv Patel (19) and Ajinkya Rahane (26) once again got Indians off the block quickly with 52 runs being raised for the first wicket from 12-odd overs even though the first four only came in the ninth over.

Rahane, dropped at third man off Steve Finn when on eight, nevertheless played some spanking shots, notably when he square cut and lofted Tim Bresnan for fours.

Rahane left the scene when he aimed to lift Jade Dernbach on the onside but only succeeded in getting a leading edge which was caught at third man by Finn. The right-handed opener made 26 off 47 balls with three fours.

Patel, unable to play big shots, tried to lift Graeme Swann as soon as the off-spinner was pressed into action in 16th over and ended up spooning it at mid-on. He made 19 from 39 balls without any four. The Indians had lost their two openers with 57 runs on the board in the 16th over. (PTI)