Gambhir didn t get to play but was seen fielding as a replacement for some other player from the team.

Indian batsman Gautam Gambhir continues to be in headlines, especially among the fans, despite not getting selected in the playing XI for India in the second Test at Eden Gardens, Kolkata. This is an iconic game for India as it s the 250th Test for the hosts at home with the first one being played back in 1933. Gambhir did not get a chance to play in the second Test as Shikhar Dhawan got a nod ahead as the second opener with Murali Vijay. As per media reports, prior to the match Gambhir was very likely to play the second Test.

Gambhir didn t get to play but was seen fielding as a replacement for some player in the team. He is known to be a good fielder at short point, silly point, forward short leg, etc. On the second day of the match, Gambhir was fielding at short point when New Zealand were 51 for 3 in the 14th over. Off the third ball of the 14th over, by Indian pacer Mohammed Shami, a front foot cut from Luke Ronchi went towards the left of short point where Gambhir was positioned. The ball traveled at a good speed to, which Gambhir got his hands but couldn t grab it .

Well, it wasn t very difficult neither easy but skipper Kohli applauded Gambhir for his efforts. Kohli didn t mind that but fans on social media took it quite seriously as they started trolling him.

#Gambhir spills one. Now I understand how #ShikharDhawan keeps his place just by catching properly. #IndVsNZ

Gautam Gambhir could have made a huge impact on this game there. Dropped NZ best batter. Never been a safe fielder anyways..#INDvNZ Saurav Jha (@iamsauravjha) October 1, 2016

Catch dropped by Gambhir .. And chance of selection too #indvsnz

gambhir- you have been dropped, sorry

g- living up to my selection, sorry

#Gambhir has just dropped. May the speed of the ball and reaction time mattered.

India scored 316 in the first innings and are currently in a strong position. One can expect another victory on the cards for them in their iconic 250th Test at home. 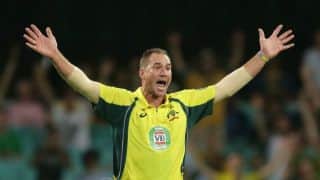