There was nothing wrong in the tweet but Twitter trolls create a reason to show their wit.

Cricket legend Sachin Tendulkar‘s tweet on Ganesh Chaturthi was trolled on Twitter. Tendulkar, an avid devotee of Lord Ganesha tried to create suspense on this occasion and the response was quite funny.

Tendulkar had a luminary visiting his place. Jonty Rhodes had paid a visit but Tendulkar wanted to play with the curiosity of his fans and to create the suspense, he wrote, “Guess who dropped by to seek Bappa’s blessings today!!?? #GaneshChaturthi”

Rhodes spends a lot of time in India and is the fielding coach of Mumbai Indians (MI) in the Indian Premier League (IPL). Tendulkar, who has been a successful campaigner for the franchise, now plays the role of mentor.

Coming to the tweet, there was nothing wrong with it but Twitter trolls create a reason to show their wit.

And they came up with their answers. Here are some of the funny and sarcastic responses. Surely, Tendulkar too would have enjoyed them.

@sachin_rt umm is that Brett Lee 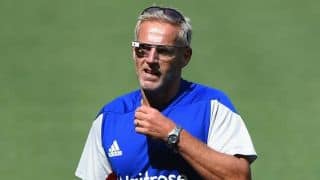