The 22-year old opener, who is yet to play an ODI or T20 for his country and was even dropped for the first two 50-over engagements against Afghanistan, was picked by Gujarat Lions.

Kolkata: Delhi-born Chirag Suri, the only United Arab Emirates (UAE) cricketer to bag an Indian Premier League (IPL) contract last month, does not rule out playing for his home nation some day and believes the cash-rich league is his gateway to fame. At the outset, it might sound improbable, but after the 22-year old opener, who is yet to play an ODI or T20 for his country and was even dropped for the first two 50-over engagements against Afghanistan, was picked by Gujarat Lions, he feels nothing is impossible.

“Of course, why not? It’s my country of birth,” Suri, who was roped in by Suresh Raina-led Gujarat Lions for his base price of Rs 10 lakh, told IANS during a chat from Dubai. “(Eoin) Morgan did that. I mean it (India) is an amazing place for cricket. And everybody loves it, the crowds, the noise, the atmosphere. I would love to play for India in the future, but I have no regrets,” said Suri, who caught Lions’ coach Brad Hodge’s eye during the Master Champions League 2016.

Having moved to the UAE at the age of six, the Virat Kohli admirer was introduced to cricket by his father Bobby Suri, who still plays the game in the Dubai Cricket Council’s Mammoths League. Suri does not feature among the eight contracted players in the UAE national team. Suri’s name is not there as he juggles between obtaining a degree in business management at Heriot-Watt University and cricket.

“Making a name for oneself is difficult here,” said Suri, who scored heavily for his school and college teams, winning best batsman awards numerous times. “But associate players getting picked in big leagues is a huge boost,” the right-hander said, citing the example of Afghanistan leg-spinner Rashid Khan who was picked by defending champions Sunrisers Hyderabad for a whopping Rs 4 crore, eight times his base price.

But to make his India cap a fairy tale-come-true, just like the IPL call-up, Suri certainly has to better his performances to cement his place in the UAE team. Suri last played in a List A game against England Lions in December 2016. “Look, this is up to the selectors,” Suri, who averaged just seven in his three List A games so far, said when asked about his omission from the UAE squad.

“In the UAE we don’t get a lot of matches and I haven’t had the innings in my career which would cement my spot so far. Going forward it’s something I want to improve on and getting big runs in important matches is what I look to achieve. “The IPL in this regard will be of great help and also rubbing shoulders with the likes of Brendon McCullum and Jason Roy will surely help,” Suri added.

It remains to be seen whether this youngster makes a mark in a team studded with top-draw openers like Aaron Finch, besides Roy and McCullum. But for a fanboy cricketer who was not even a household name in the UAE before the auctions, reaching this far is creditable enough. 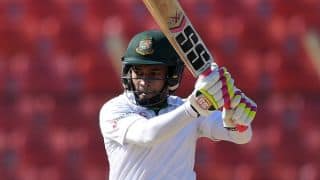