The brace took Ronaldo's tally of goals in international football to 118.

New Delhi: Cristiano Ronaldo was in top form in Portugal’s UEFA Nations League clash vs Switzerland and scored a brilliant brace. The Manchester United star’s scintillating display helped his side win the clash by a whopping margin of 4-0. This was Manchester United’s first win of the 2022-23 edition of the ongoing tournament.

William Carvalho opened the account for Portugal before the five-time Ballon D’or winner extended their lead to 2-0 in the 35th minute. Four minutes later, the veteran once again scored, giving Portugal a massive 3-0 lead going into the half-time. Later, Manchester City full-back Joao Cancelo ended all hopes of a Swizz comeback with a scintillating goal in the 68th minute to ensure a resounding win for Portugal.

Meanwhile, the match witnessed a very emotional moment. After Ronaldo scored his first goal, the cameras turned to Ronaldo’s mother, Dolores Aveiro, who was in tears, standing and applauding his son’s brilliant goal. The moment left everyone emotional.

Meanwhile, Ronaldo took to Twitter and posted a heartfelt note after a brilliant win over Switzerland. “A very important victory in our journey, a lot of pride and confidence in this group, a lot of strength to give the Portuguese what we so desire: victories and convincing performances. It looks like the season is about to end, but really this is just beginning!” 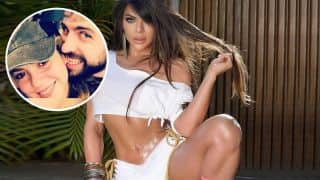