Time away from the Indian team has allowed Umesh the chance to work on his approach.

Fast bowler Umesh Yadav has opened up on his eight-month absence from Test cricket and missing the 2019 ICC Cricket World Cup, and how not playing for India since February allowed him time to work on his skills to boost his confidence.

Umesh was part of India’s Tests squad that toured Australia in late December 2018, and played one of four matches on that tour. At Perth in the second Test, he took two wickets for 139 runs from 37 overs. Umesh’s last ODI was in October 2018 and in T20Is, he got one match against Australia in February when he conceded 35 runs from four wicketless overs.

Overlooked for the World Cup, Umesh played 11 IPL matches for Royal Challengers Bangalore in 2019 from which he managed eight wickets.

(READ: Rahane, Vihari get fifties before India draw with West Indies A)

Since the IPL ended in May, he has played one first-class match for India A in the West Indies recently – taking two wickets – and claimed 3/19 from 10 overs in the tour match.

Speaking after India’s three-day game against West Indies A ended in a draw on Monday, Umesh spoke of the opportunity to work with his coach Subroto Bannerjee in Vidarbha.

“I gave myself some time to work on my errors and get my rhythm back,” he said. “I worked on my lengths. It happens with fast bowlers, when you are playing in different countries. You’re unable to settle to a specific length. I worked on that.

“There are times when everything is going good but your mind is distracted thinking that things are not going the way you want it to be going. To get away and think, that space of mind is important. I did the same. I went home, spoke to my coach, cleared my thoughts and got clarity.

“You need an off-time because it is only during your off-time that you can re-channelise your mindset. I worked with my coach and asked him for his opinion. He was very positive and that’s what you want. When you get that positivity, you’re confident that you’re getting better. I even spoke to the batsmen and the support staff, and they also said that ‘whatever you’ve been doing, it seems to be working’.”

Umesh is part of India’s Test squad to play two matches against West Indies starting Thursday. He is the fourth pace bowler in the squad, alongside Jasprit Bumrah, Ishant Sharma and Mohammed Shami.

“When you know that you’re going to be playing back-to-back Test matches, you also need that kind of a bench-strength,” said Umesh. “All the fast bowlers know there is a good competition and that everyone is going to get an opportunity. Whoever does well, will get to play more. If we think in that manner, it’s good for us because we will try to improve ourselves.”

Taking three wickets in India’s game with West Indies A has given Umesh reason to believe he could the nod come Thursday.

“I bowled the kind of deliveries I wanted to. I focused on the areas that I wanted to bowl, and I managed to bowl there,” he said. “As a fast bowler you need a bit of practice to set you rhythm, to know what line and lengths you to hit. I’ve also tried the same, to get my rhythm right, preparing myself to do what I’ll be doing in a match situation.” 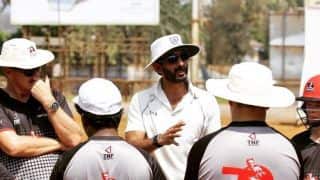