Unmukt's fifty put MI on course to a good total against RCB.

Unmukt Chand has scored his first Indian Premier League (IPL) fifty during the match between Mumbai Indians (MI) and Royal Challengers Bangalore (RCB). This has been a very good one from Unmukt as he has taken this opportunity with both hands and has gone on to help MI towards a good total. Unmukt is known as one of the best talents in the country and this in encouraging. LIVE UPDATES: Royal Challengers Bangalore vs Mumbai Indians

Unmukt came in at No. 3 and has batted with aggression, but has also managed to keep his head. Lendl Simmons had scored 59 and that put up a good platform for MI in this game. Unmukt was backed to go in early and it is good to see that he has answered the calls of the team management. Right now, MI look to smash it in the last four overs and have Rohit and Unmukt in the middle. LIVE SCORECARD: Royal Challengers Bangalore vs Mumbai Indians

RCB had won the toss and had chosen to bowl first with four changes to their side. MI also had three changes but Unmukt was one of them. Unmukt is now converting that potential to performance. 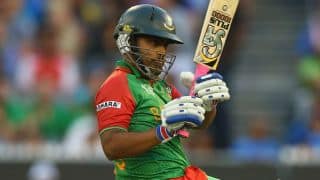