Sri Lanka suffered their worst defeat in T20Is after India crushed them by 93 runs in the series opener.

Sri Lanka suffered their worst defeat in T20Is after India crushed them by 93 runs in the series opener and senior batsman Upul Tharanga said the team must show some fight in the remaining matches of the tour.

Sri Lanka won the toss and opted to bowl on a dew-laden Barabati Stadium, but proved no match to India as they were bundled out for a paltry 87 while chasing 181 yesterday.

“It’s tough to be on the losing side but we still have to show some fight. We did all right in the one-day series but here we are disappointed,” Tharanga said in the post-match news conference yesterday.

In their 100th T20I appearance, the Sri Lankan innings folded in 16 overs after man-of-the-match Yuzvendra Chahal triggered their collapse with a 4/23, before Hardik Pandya ripped through the tail claiming 3/29.

“I am very disappointed with the way we batted. We should have batted 20 overs. Losing is okay but we have to get close to the target. The main thing is we could not compete.”

“While bowling, we started well but in the middle and death overs we gave too many boundary balls and momentum shifted to India,” Tharanga said.

Asked whether the team was missing senior players, Tharanga said it was the best possible squad available.

“This is the best team at the moment. We missed a lot of players because of injuries in the last few series but everyone is here.

“I do not think we are missing anyone. It is about being consistent in all the three departments — batting, bowling and fielding,” he said.

Tharanga also revealed that former Test cricketer Thilan Samaraweera helped him with his batting techniques and the left-hander has benefited from the advice.

“Samaraweera has played a lot of cricket with me. He has seen me batting from the close quarters and he said I should change my batting stance.”

“He asked me why I changed my foot movement. Now with my new batting stance, I am getting a bit of rhythm and the credit goes to Thilan,” Tharanga, who scored a 82-ball 95 in the third ODI in Visakhapatnam, said.

The second and third T20Is of the series are slated in Indore (December 22) and Mumbai (December 24) respectively. 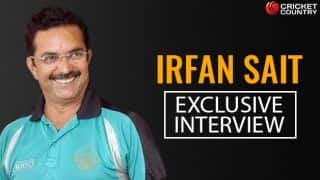