Usman Khawaja will look to prove his fitness in the Big Bash League playing for Sydney Thunder before the Boxing Day Test.

After breaking into the Test team, Usman Khawaja now looks to find his way into the one-day international squad with Australia playing more of the 50-over format through the summer. Khawaja made a memorable return to Tests after scoring a magnificent first hundred for Australia and following it with another exquisite 121 in Perth, both against New Zealand. Khawaja hasn’t played a ODI since 2013 and talked about making a return this summer, “I talked to selectors (about missing the England tour) and I think at the end of the day they just weren’t fully comfortable with me at the time coming back from my knee injury,” Khawaja. Khawaja added,”I felt like I was ready to play but there’s a lot that goes on behind the scenes. “I was disappointed but I moved on pretty quick … you figure out a way to get past ups and downs. But at the same time I really want to play one-day cricket for Australia.” ALSO READ: Australia wary of West Indies despite latter’s poor show in tour match: Peter Siddle

“It’s one of those goals I’ve had for a while and it will remain one of those goals even though I’m playing Test cricket right now. Obviously my first and foremost right now is trying to get myself fit if I get the opportunity to play these last couple of Test matches … but at the same time moving forward I want to play as many forms of the game for Australia as I can, I don’t want to limit myself,” explains Khawaja as told News Corp. Khawaja has missed out on the historic first ever day-night Test at Adelaide due to a hamstring injury he suffered at WACA while fielding, is also set to miss the first Test against West Indies in Hobart starting on Thursday. ALSO TOLD: Australia’s David Warner looks to set record straight against West Indies

Khawaja, 28, will play for Sydney Thunder in the Big Bash League to prove his fitness for the Boxing Day Test, and is looking ahead to get himself in 50-overs leg of the season to add to his three ODI appearances. 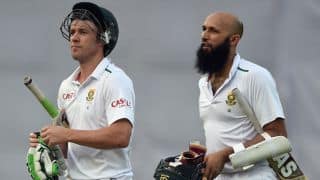