Marcus Trescothick played a lone hand in Somerset‘s second innings against Hampshire at The Rose Bowl. Trailing by 42, Somerset lasted only 37 overs in their second innings. Dale Steyn (4 for 34) and Kyle Abbott (6 for 40) bowled 28 of these between themselves, accounting for all ten wickets. However, they could not dislodge the 42-year-old Trescothick, who was last out, for 50 out of a total of 116.

As Abbott bowled a probing line, taking out the first four wickets and reducing Somerset to 20 for 4, a duel emerged at the other end. Steyn kept testing Trescothick outside off but to no avail. Alex Davies smote 23 off just 28 balls to help add 41 for the fifth wicket (and save the innings defeat), but Steyn and Abbott were relentless.

Somerset were nine down when Steyn hit Trescothick on the head. Trescothick retaliated with a four and a six to bring up 26,000 First-Class runs. Another six, also off Steyn, took him to fifty before he chopped one on. Steyn finished with match figures of 7 for 71 and Abbott with 11 for 71.

A target of 75 was never going to test Hampshire. Craig Overton took out three quick wickets, but Jimmy Adams in his final season saw them to victory. Somerset’s defeat also means Surrey need only seven points from their match against Worcestershire at New Road to clinch the title and they have already got three of them. 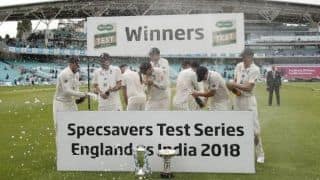 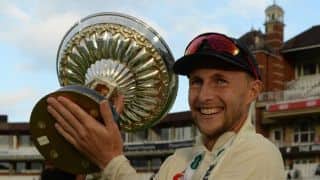