Vernon Philander is confident both he and South Africa will be firing on all cylinders as they look to draw their Test series with England at Old Trafford.

Manchester: Vernon Philander is confident both he and South Africa will be firing on all cylinders as they look to draw their Test series with England at Old Trafford. Philander was unable to be at his best during England’s 239-run win in the third Test at The Oval after being struck down by a mystery stomach virus which meant he could only bowl 32 overs in the match. What made it worse for the Proteas was that the overcast conditions appeared ideal for accurate seamer Philander, renowned for his ability to make the most of any assistance from either cloudy skies or a pitch with some ‘juice’ in it. FULL CRICKET SCORECARD: England vs South Africa 2017 – 4th Test at Old Trafford

The man-of-the-match in the Proteas’ second Test success at Trent Bridge, Philander even spent one night of The Oval match on a hospital drip. The best South Africa can hope for now, at 2-1 down in this four-match series, is a share of the spoils. And Philander is eager to play his full part when the Manchester fixture starts on Friday. “It was either something I picked up or something I ate that really ‘drilled’ me for a couple of days,” Philander told reporters at Old Trafford on Wednesday as he recalled his illness. It was a tough week personally, but I’m looking forward to this one,” he added.

Philander was already unwell come the toss in south London but, with few other options at his disposal, South Africa captain Faf du Plessis decided a half-fit Philander was better than none at all. In the end, the move did not pay off with the Proteas a bowler down at crucial stages of England’s first innings in particular. “I think it probably got a lot worse having to bowl after losing quite a lot of fluids,” the 32-year-old Philander explained. Joe Root: What a way to celebrate 100th Test at The Oval

“The night in hospital, being on a drip, really revitalised me. But then in the morning, it was [not good] again. Being on the loo for quite a bit, and having to go out to bowl, it was draining from a fluid point of view because I couldn’t really keep anything down. It was really bad, but I’m feeling a lot better now,” Philander insisted. Friday’s match will mark the final fixture of a lengthy tour, by modern standards, that started in mid-May.

“We’ve got an honesty policy within the side, and we all admitted it wasn’t our best Test match,” Philander said of South Africa’s display at The Oval. “We let ourselves down with the bat in the first innings … so we’re looking forward to correcting those mistakes in this one and hoping to go level in the series.” But there was no denying the effect of Philander’s restricted involvement at The Oval, with the all-rounder admitting: “Any sort of bowler, if you can’t go at 100 percent and the conditions are suited for you as well … it was really frustrating. Moeen Ali: Have scored couple of hat-tricks in football but never in cricket

“I’m obviously quite an important part of the line-up … and bowling at 70 or 80 percent I could feel that my intensity was missed. But there’s no excuses. We lost a Test match … and we need to step up come Friday.” The pattern so far has seen seen a heavy victory for one side followed by an equally dominant success for the other, with two large England wins falling either side of a massive 340-run victory for the Proteas at Trent Bridge. “We hope the trend keeps going,” said Philander. “It’s a bit of a rollercoaster at the moment, the way it’s been going and the margins of victory and defeat. But the boys are ready for this one.” 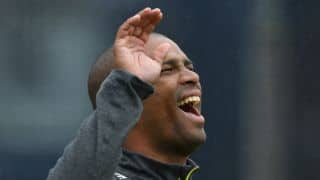