VIDEO: Mandeep Singh fields for South Africa A vs India A at Chennai

VIDEO: Mandeep Singh fields for South Africa A vs India A at Chennai

India A comfortably chased down a target of 245 set by South Africa A.

Mandeep Singh came out to field for South Africa A in Match Three of the tri-series against India A at Chennai. India A were set a target of 245 by South Africa A and century from Mayank Agarwal and a brilliant 90 from Unmukt Chand during a 219-run stand for opening wicket was good enough to see them sail to a comfortable win. Mandeep came onto to field in the 32nd over, wearing a Reeza Hendricks jersey. South Afroca A had used up all their substitute fielders and Mandeep took the field for Quinton de Kock, who scored a brilliant century when he batted first. Live cricket updates: India A vs South Africa A, Tri-series Match 3 at Chennai

Mandeep Singh, is that you? https://t.co/uAOXNOmmmM

Agarwal got a life early on as he was caught at second slip but the third umpire did not find conclusive evident to rule him out. He went onto score his fourth List A fifty. Chand caught up with Mayank by scoring his 12th List A fifty. The South Africa A players suffered from the heat but nothing stopped the two India batsmen to score runs. Mayank brought up his fourth Test ton and then started to feel the heat. India lost their first wicket in the form of Chand who was out leg before to Dean Eglar for a score of 219, needing further 26 runs to win. Read: Quinton de Kock century drives South Africa A to 244 against India A in Chennai

Earlier, South Africa A had won the toss and elected to bat first. India A had lost their first game against against Australia and now have registered their first win of the tri-series. They will look to avnge their lost from the first game against Australia A against them in the next match. Photo: Mandeep Singh fields for South Africa A against India A at Chennai Michael Vaughan: This is an England team of huge promise 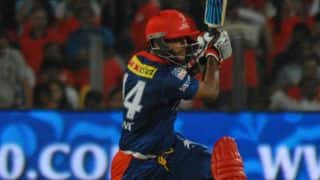