On this day, in 2003, Sachin Tendulkar played one of One-Day cricket's greatest innings to ensure India maintained their unbeaten streak in World Cup against arch-rival Pakistan.

How often do we come across a scorecard, which shows the following?

It seems surreal when you think that the year was 2003. But such instances are not surprising when the gentleman named Sachin Tendulkar is in full flow. On this day, in 2003, Tendulkar played one of One-Day cricket’s greatest innings to ensure India maintained their unbeaten streak against arch-rival Pakistan.

Cricket fans from both sides of the borders anxiously waited for March 1, 2003. The political conflicts had resulted in a situation that the neighbouring nations had not played a cricket match for almost three years.

It was the ICC Cricket World Cup 2003 and Centurion was the venue for the epic clash. Sourav Ganguly’s Indian side were playing some excellent cricket, while Pakistan were not doing well but they had a formidable side.

Random handshakes and the match began. Four years before this, Saeed Anwar registered the highest ODI score against India at Chennai. His 194 still topped all the charts. Pakistan won the toss and elected to bat, and India’s old tormentor Anwar was up at it again. His century ensured Pakistan to a competitive total of 273 for 7. It was always going to be between the Indian batsmen and Pakistani bowlers but 273 still looked massive because the Pakistani attack comprised of Wasim Akram, Waqar Younis and Shoaib Akhtar. The man who had been nicknamed the ‘Rawalpindi Express’ had broken the 100-mile barrier earlier in the tournament.

There is a story that goes: Tendulkar and Virender Sehwag walked out to bat and the latter requested his senior partner to not instruct him anything on the field as he was in a murderous mood. Tendulkar responded, “I am going to get those guys.” Apparently, the Master Blaster had not slept well for the past few days, thinking about this faceoff.

Tendulkar usually never took strike on the first ball but this time he did and he was up against left-arm wizard Akram. He played an excellent square drive off the third ball for a boundary. When umpire David Shepherd asked him why he had taken strike, Tendulkar replied, “I want to impose myself on this match!”

A rather modest answer for what was to come. Considering the quality of the bowling attack, it was one of the best knocks Tendulkar has played in ODI cricket. Akram, Waqar and Shoaib were meted out some harsh treatment. In the second over of the match, Tendulkar gave fans a moment, etched in the annals of history. Shoaib bowled a wide fast one outside off-stump and the batsman deposited it over point for a six. The next ball was beautifully flicked for a boundary and the next ball was just a defensive push but it was timed so well that it beat skipper Waqar to the straight boundary.

Waqar then introduced himself and this time it was Sehwag’s turn to show him no mercy. Pakistan did come back and managed to get wickets of Sehwag and Ganguly off consecutive balls but Tendulkar was unstoppable. But for once there was a hiccup. Tendulkar drove Akram uppishly and Abdul Razzaq, who was repeatedly asked by the bowler to stand at the edge, was far inside and only got fingertips.

A cramp attack tried to subdue Tendulkar but he continued cutting, pulling and hammering the Pakistanis all over the ground. Not for the first time in his career, he mastered the opposition and also physical discomforts to craft a majestic knock.

Tendulkar was on 98 when a Shoaib delivery took off and caught the batsman by surprise. Kissing the leading edge it took the route towards gully, where Younis Khan did not miss out the opportunity. Tendulkar walked back having scored 98 from 75 balls. India were still 97 away and dramatic collapses have been a part of the side’s folklore.

However, the mastery of Yuvraj Singh and Rahul Dravid ensured there were no dramas as India sealed it off by six wickets in the 46th over. The celebrations continued in India over the weekend and India’s honeymoon ride continued till the final when the Ricky Ponting-led Australian side ended their dream run. 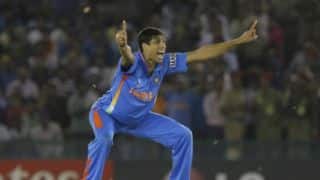