Lord's, cricket's spiritual home, was witness to some of Smith's unique technique as he battled the charging England pacers.

Expect the unexpected when Steve Smith is batting.

The Australian batting maestro is not only known for his Bradmanesque appetite of scoring runs but also the unconventional, sometimes bordering on the ridicule, ways of batsmanship. He can play a classical cover-drive and then contour his body in every way possible to either defend, steal a boundary or even while leaving a delivery.

Lord’s, cricket’s spiritual home, was witness to some of Smith’s unique technique as he battled the charging England pacers who had left his Australia wobbling, wiping out their top-order in quick time on Day 3 of the second Ashes Test.

Smith returned to Test cricket after serving a 12-month ball-tampering ban with two centuries to lead Australia to a big win at Edgbaston and hand his team a 1-0 lead in the five-match series.

In the first innings of the series opener, Smith batted with the tail to ensure Australia had enough in the bank to stay in the contest. Then in the second innings, he struck another ton which helped the tourist set England a huge target which eventually proved well out of their reach.

On Friday, before rain wiped out the majority of the day, Smith was again out in the middle with Australia in a tricky spot. But that didn’t stop him from putting on an animated display, possibly to throw the England bowlers off guard with Stuart Broad even suggesting his continuous fidgeting might have distracted umpire Aleem Dar while making one particular decision.

Whatever Smith’s intention, it sure did make for an entertaining watch. So much so that England and Wales Cricket Board (ECB) created a short clip of his amazing technique and out put it up on their social media accounts drawing hilarious reactions. 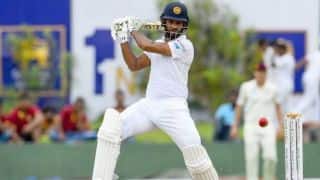