Shane Watson took the mike to sing 'Twist and Shout' by 'The Beatles' while Virat Kohli and Chris Gayle heated up the dance floor.

There’s something about the duo of Virat Kohli and Chris Gayle that makes them fun to watch. The two players are known to be one of the closest friend beyond boundaries and were seen shaking legs together time and again. As Indian Premier League (IPL) 2016 takes place, the duo doesn’t fail to entertain this time as well as they were again seen taking part in a fun dance and this time, they also included their newest Aussie entrant Shane Watson in the party. FULL CRICKET SCORECARD: Sunrisers Hyderabad vs Royal Challengers Bangalore, IPL 2016 at Hyderabad

Both the players are good at dancing and they proved it once again showing their skills off while Watson, strumming the guitar, sang the famous number through out. Teammate David Weise was also seen enjoying the song as he along with his wife was caught dancing. Royal Challengers Bangalore (RCB) have done decently so far in the tournament while skipper Kohli has been in a tremendous form scoring runs consistently.

The team will play Sunrisers Hyderabad (SRH) in their next match at home on Saturday. RCB faced a heart-break defeat in their previous fixture when they lost to Gujarat Lions despite skipper’s maiden T20 century in the first innings. 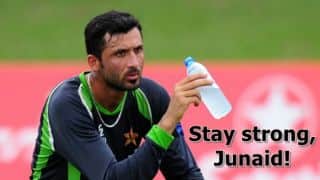