In the 1983 World Cup, Indian captain Kapil Dev’s incredible 175 not out bailed his side from deep waters, as they snatched an improbable win from jaws of defeat. The knock, which was the highest ODI score of that time, inspired India to lift the trophy. Less than a year later, Viv Richards went on to break the record.

If someone could have broken the record in that era, it would have to be Richards, who indubitably can be termed as the greatest ODI batsman of all-time. It was the first ODI between England and West Indies in 1984, and the venue was Manchester. Clive Lloyd won the toss and elected to bat, and soon West Indies were reeling at 102 for 7 in the 26th over.

It was a one-man show and Richards slammed 189 from 170 balls to take his side to 272. He scored over 69 percent of his team runs. The next highest score was 26 by No. 9 batsman Eldine Baptiste.

Richards struck five sixes and 21 boundaries in what was one of the greatest cricket knocks of all time. In the end, England fell short of Richards’ score by 21 runs. In the above picture, we see Richards sharing a moment with his best friend Ian Botham from England camp.

Richards’ ODI score stayed at the top for 13 years before Saeed Anwar went past it with his 194 in 1997. 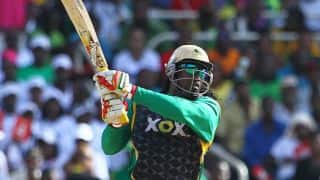