Akram chose to Dubsmash on Big B's lines from ' Agneepath' along with his Star Sports co-host Jatin Sapru.

New Delhi: Former Pakistan Captain Wasim Akram couldn’t choose anything better for his Dubsmash debut other than Amitabh Bachchan‘s iconic lines. The 49-year-old cricketer, who looked suave in a suit with gelled up hair and glasses, chose to Dubsmash on Big B’s lines from ‘ Agneepath’ along with his Star Sports co-host Jatin Sapru. Posting the video on social media, Akram tweeted, “Rain’s boring, we are not! #KentCricketLive Behind the scenes.. Convinced @wasimakramlive ‘s for his first dubsmash”. The video was shot during the interval of the third T20I between India and South Africa on Thursday, that got washed out without a ball being bowled. India vs Pakistan 2015: Wasim Akram feels Narendra Modi should give green signal for series

Earlier, Akram had urged Prime Minister Narendra Modi to clear the proposed series between India and Pakistan, adding that calling off the series will be a great loss for the cricketing world. The Express Tribune quoted Akram, as saying he was sure that Modi will give the green signal for the series, and added that as a cricketing superpower, it is the BCCI‘s duty to look around the world and cooperate in others’ progress. Akram also described the series between India and Pakistan as the ultimate contest, adding that its intensity outmatches every other cricketing rivalry. He hoped that cricketing ties between the two nations should go on uninterrupted. According to the MoU signed between PCB and BCCI, both countries are scheduled to play six series in the 2015-2023 Future Tours Programme, but all were subject to clearance from New Delhi. As per schedule, India have to play Test series against Pakistan in December at United Arab Emirates. Younis Khan: Wasim Akram need not worry about my Pakistan cricket career

Rain’s boring, we are not! #KentCricketLive Behind the scenes.. Convinced @wasimakramlive ‘s for his first dubsmash pic.twitter.com/s5wwrqzxDe

India have not played a full bilateral Test series with Pakistan after the 2008 Mumbai terror attacks. 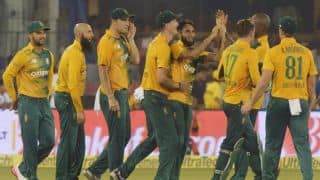 MS Dhoni: Ajinkya Rahane will either bat in top 3 or not play at all