the umpire raised both his hands to declare it a legal six!

Each batsman has his own style to play shots. While some depend on the strength of their hands, for some, it is the way he uses the pace of the delivery. Cricket followers across the globe have witnessed many unorthodox shots in the history of the game in the limited-over formats of the game where hard hitting is the mantra but in County Cricket, it is not a very common phenomenon. But something unusual occurred when England‘s Jonny Bairstow pulled off a six out of nowhere while batting for Yorkshire against Nottinghamshire this County season. Video: Schoolboy Aaron Beard bowls out Sri Lanka

Nottinghamshire, batting first, amassed a total of 261 playing 69.2 overs. Opener Steve Mullaney delivered a standout performance with his 78 while Michael Lumb later on added a vital 49 to help them get to the score against a brilliant Nottinghamshire bowling as Jack Brooks and Adil Rashid had done exceptionally well. Yorkshire, in reply, made 290 all out with the help of Alex Lees’ 92 and Liam Plunkett’s 51. Jake ball took a 4-for while Samit Patel took two maintaining a brilliant economy of 2.18.

In their second innings, Nottinghamshire scored as much as 348 runs with a one-man show from Chris Read who scored a much-needed century batting at No. 7 . Read was well supported by Stuart Broad, who scored 55 runs. Brooks did well with the ball again while he was well complimented by Steven Patterson who took a 4-for.

It was Yorkshire’s second over and Garry Ballance had scored a good 43. Lees was as usual brilliant with the bat, close to his hundred while Bairstow came in to bat. After gathering 7 runs facing 4 deliveries, he did something that the crowd could hardly think of. Stuart Broad came up with a good length delivery way outside off-stump. Bairstow, who had already adjusted himself outside the stumps, went on the front-leg and within a few moments, the ball went for a flat six.

The shot, which can neither be called a scoop nor be described with any other term in cricket glossary, looked impossible to reach the fence as Bairstow barely middled it and it looked like getting the leading edge. Call it a power of the bat, or the cricketer’s talent, the umpire raised his hands to declare it a legal maximum.

The match ended in a draw and both Yorkshire and Nottinghamshire bagged 10 points each. 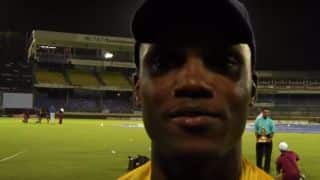