Video: When Virat Kohli, Glenn Maxwell laughed over their banters

Video: When Virat Kohli, Glenn Maxwell laughed over their banters

Earlier, Glenn Maxwell rubbished rumors of being critical on Indian batsman Virat Kohli and clarified his statement over social media

Indian batsman Virat Kohli and Australia’s striking batsman Glenn Maxwell joined hands together for Maxwell’s video blog with a short preview released by cricket.com.au over social media. Maxwell speaks to Kohli with his spat over James Faulkner, his connection with Mitchell Starc and which shot does Kohli prefer to play, reverse sweep or switch in. The full video will be launched soon on cricket.com.au and more candid conversation will be let out by the two players. Recently, Maxwell rubbished rumors of being critical on Indian batsman Kohli and clarified his statement over social media and with the short preview of Kohli participating with Maxwell on his blog, the news can be put to rest. READ: Virat Kohli: Had no idea Steven Smith was on microphone during 1st India vs Australia 2015-16 T20I

Kohli had also cleared the air of the misunderstanding with regards to his comments made on Australia skipper Steven Smith where he gave a fiery send-off during 1st Twenty20 International (T20I) match at Adelaide. The wicket came just moments after Smith had been talking to Channel Nine’s commentators, and some interpreted Kohli’s actions as a disapproval of the multi-tasking job Smith was doing. But during the innings break of second T20 clash at the MCG which India won to clinch the series, Kohli explained it was not related to what Smith was doing with the microphone but still everything to do with what the Australian had said in the middle of Adelaide Oval. READ: Glenn Maxwell: My comments on Virat Kohli have been taken out of context

Kohli continued his dream form and plundered another half-century in the second Twenty20 International (T20I) against Australia at Melbourne of Friday. Kohli brought up his fifty in style as he drove one through covers to a fuller one from Andrew Tye. He brought up his fifty in just 29 deliveries to steer India in a commanding position.

.@Gmaxi_32​ asked @imVkohli​ to join him on his video blog and here’s a little preview…

India will take on Australia in 3rd T20I at Sydney on Sunday to seal the three-match T20I series to India’s name. 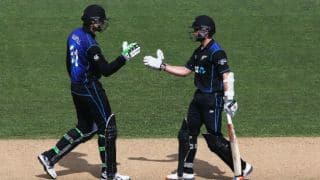