Yuvraj Singh got out hit wicket off Mitchell McClenaghan's bowling.

Sunrisers Hyderabad batsman Yuvraj Singh got out hit wicket today in Match 37 of Indian Premier League (IPL) 2016 against the Mumbai Indians (MI). Hit wicket is a rarity in cricket. Yuvraj got out hit wicket off the bowling of Mitchell McCleneghan for 39 runs off 23 deliveries. Yuvraj hit three boundaries and two sixes in his innings. We can see in this clip that Yuvraj was late in his shot as he was trying to guide the ball towards the off side or probably changed his shot into a defencive stroke but ended up clipping the top of the stumps and the bails were dislodged. McCleneghan had a nice laugh after the wicket. Yuvraj was the third-highest run-scorer in SRH’s innings after Shikhar Dhawan’s unbeaten 82 and David Warner’s 48-run knock. Live Cricket Scorecard: Mumbai Indians vs Sunrisers Hyderabad, IPL 2016 Match 37 at Visakhapatnam

SRH posted 177 after being invited to bat first by the opposition. Yuvraj got out hit wicket on the fourth ball of the final over. According to the laws of cricket, if the bails are dislodged owing to the contact of a batsman’s bat or his body while the ball is in play and the bowler is through his delivery stride than the batter is hit wicket. Hit wicket is quite rare, and it is the sixth most common mode of dismissal after catch out, bowled, LBW, run out and being stumped.  A bowler usually never attempts to get the batsman out hit wicket like he employs a strategy to get him out either caught, bowled, LBW or stumped in most cases.

At the time this report was published, Mumbai Indians had lost 5 wickets and they had just 30 runs on board. They required 148 more runs from 94 deliveries with only 5 wickets remaining.

Waqar Younis opens up on bowling rivalry with Wasim Akram 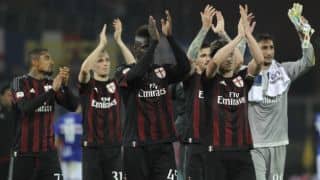