Karnataka's below par performance in the ongoing domestic season continued as they suffered a narrow defeat at the hands of Railways.

Bengaluru: Karnataka‘s below par performance in the ongoing domestic season continued as the defending champions suffered a narrow defeat at the hands of Railways in their opening match of the Vijay Hazare Trophy. Karnataka, who failed to make the Ranji Trophy quarterfinals as defending champions, got another rude shock when Railways hit the winning runs of the last ball of the match to chase down the 229-run target with a wicket to spare. Akshat Pandey (19 runs off 19 balls) stuck a four of the final ball of the 50th over to clinch a thrilling win for his team a the Chinnaswamy Stadium. Live Cricket Score Vijay Hazare Trophy 2015-16, all matches, Day 1

The three major contributions in the chase came from wicket-keeper Mahesh Rawat (50), opener Asad Pathan (50) and leg spinner Karn Sharma (51). Fast bowler Anureet Singh also came up with a handy 19 towards the end of the chase. Karnataka came up with an ordinary batting effort and kept losing wickets at regular intervals. The few bright spots of their innings were a 60-run stand at the top between Mayank Agarwal (44) and Lokesh Rahul (27) besides an unbeaten 50 from skipper from Vinay Kumar. Apart from hitting the winning runs for Railways, Pandey took three wickets in Karnataka’s innings. 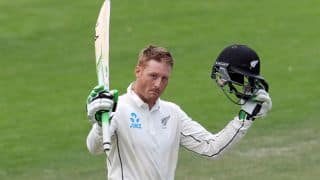