The opening round of the Vijay Hazare Trophy 2019-20 turned out to be a damp squib in Alur and Vadodara, as all Group A and Group B matches were abandoned without a ball being bowled on Tuesday.

Defending champions Mumbai, in Group A, alongside Saurashtra, Hyderabad, Karnataka, Andhra and Chhattisgarh were forced to share points after wet outfield washed out the day’s play at Alur.

At Vadodara, were Group B matches are to be played also suffered due to overnight rain and Delhi, Vidarbha, Maharashtra, Himachal, Baroda and Odisha were forced to share points.

However, in six other other matches, three each from Plate Group, being played in Dehradun and Group C, played in Jaipur are currently on.

A total of 38 teams are vying for the title this season with Chandigarh being the new entrants. 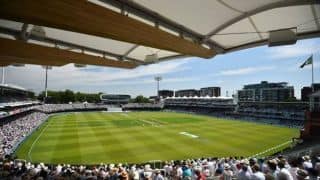