Himachal Pradesh beat Vidarbha by six wickets with 20 balls remaining with opener Prashant Chopra (82) scoring the bulk of the runs.

Captain Samarth Singh and Akshdeep Nath struck a half century each to help Uttar Pradesh record an easy seven-wicket win over Baroda in an Elite Group B match of Vijay Hazare Trophy National One-Day tournament in Vadodara on Monday.

Chasing 213 for a win, Samarth scored 62 from 79 balls at the top of the innings before Akshdeep took UP home with 2.2 overs to spare with an unbeaten 75 which he hit from 107 deliveries.

Samarth had five fours and a six in his innings while Akshdeep struck nine boundaries during his knock.

The duo stitched 81 runs together for the third wicket from 19.5 overs to take UP closer to victory. Akshdeep then shared 49 runs with Rinku Singh (23 not out from 38 balls) for the unconquered fourth wicket as UP reached 213/3 in 47.4 overs.

Earlier, electing to bat first, Baroda made 212 for 6 in their allotted 50 overs with one-down Vishnu Solanki and Yusuf Pathan contributing 58 and 55 runs respectively.

Baroda suffered a top-order collapse as they were reduced to 16 for 3 in the seventh over with pacer Ankit Rajpoot (3/43) claiming all the top three wickets.

Pathan and Solanki revived with the Baroda innings with a 91-run partnership for the fifth wicket to pave the way for their side go past 200-run mark.

In another match here, Himachal Pradesh beat Vidarbha by six wickets with 20 balls remaining with opener Prashant Chopra (82) scoring the bulk of the runs as his side successfully chased down the target of 184 in a 42-over-a-side match.

Odisha also emerged victorious in another Group B match here as they beat Maharashtra by three wickets.

Riding on an unbeaten 119 off 130 balls by captain Subhranshu Senapati, Odisha chased down the target of 260 with five balls to spare. 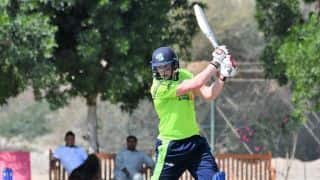