In other Group C matches, Rajasthan defeated Services for its first win while Bengal beat Tripura by five wickets.

Baba Aparajith starred with an all-round performance, striking an unbeaten 111 (124 balls, 7 fours, 1 six) after taking 4 for 30 as Tamil Nadu thrashed Railways by eight wickets to notch up a seventh straight win in Group ‘C’ of the Vijay Hazare Trophy cricket tournament in Jaipur on Wednesday.

Tamil Nadu leads the group with 7 wins and 28 points and is almost certain to qualify for the knockout phase.

Gujarat is currently second with six wins from six matches and has three in hand.

Tamil Nadu’s chase did not get off to a great start as the in-form Abhinav Mukund fell for 11, caught and bowled by Ananta Saha while his opening partner Murali Vijay was run-out for 6.

However, Aparajith and Shankar dashed any hopes the Railways had of launching a fightback with a superb partnership, during which they played some attractive shots and rotated strike judiciously.

Aparajith has been in great form in the tournament and added a century to his four half-centuries.

The Railways captain Arindam Ghosh tried eight bowlers but not could make an impression on Aparajith and Shankar, who collected runs in a calm and impressive fashion, overhauling the taraget in the 45th over.

In other matches, Rajasthan defeated Services for its first win while Bengal beat Tripura by five wickets. 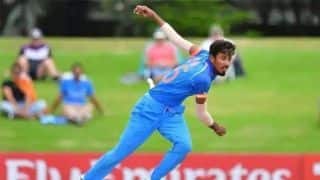