A middle-order batsman, who can also bowl medium-pace, Vijay Shankar is not willing to attach much importance to the Hardik Pandya comparison.

Tamil Nadu all-rounder Vijay Shankar, in the 15-member India squad for the upcoming Twenty20 cricket tri-series to be held in Sri Lanka, says he is under no pressure to fill in the shoes of Hardik Pandya who has been rested for the tour.

Shankar says he knows he has been picked as a second option to Pandya with skipper Virat Kohli stating that the team management wants to groom the 27-year-old as back-up for the wiry Baroda cricketer.

But the middle-order batsman, who can also bowl medium-pace, is not willing to attach much importance to that.

“I don’t give much importance to that (laughs). Pressure is something that is going to be there all the time when you step on to the ground. You have to be calm and play the same way you play everywhere,” Shankar told IANS.

Snapped up by Delhi Daredevils for Rs 3.2 crore in the Indian Premier League (IPL) auctions, Shankar feels every cricketer in the Indian team is special in his own way and he still has a lot to learn from each one of them, which is his primary target.

“Every cricketer has something special to give. As cricketers we look up to everyone. We can learn from everyone and it’s not about comparing,” Shankar said.

Shankar fared reasonably well in the domestic T20 tournament, the Syed Mushtaq Ali, and the 50-over competition, Vijay Hazare, showcasing his hitting prowess with quite a few crucial cameos laced with sixes.

“I always see domestic (cricket) as a very important stage because whenever I do well I get that confidence of getting to the next level from there. So it is very important for me to do well in the domestic matches,” Shankar opined on his performances.

Shankar said he has been training with his coach S Balaji on specific drills over the past few months, and the focus is on power-hitting.

“I have practised with my coach and we worked on a few things. I am working on that. I don’t think I need to do something really different. It is important for me to keep doing whatever I am doing,” Shankar said.

With the World Cup in a year’s time, Shankar said he is not thinking too far ahead at the moment.

“I don’t think much about all those. I take this as an opportunity for me to experience how it is at that level. It is more about that and not about putting myself under pressure. I am not thinking about the World Cup or anything else. It is more important for me to learn things on the field from the seniors,” Shankar quipped.

Asked about the mental make-up before heading into the series, Shankar signed off by stating he has always been an avid thinker of the game and that should hold him in good stead.

“For me the mental aspect is, I always think a lot about the game. I watch the game with good intent and to learn something from each and every game. I feel that will help me to adapt to different conditions which is very important,” he said.

“Mentally, I should be ready to take up the challenge. All the fitness and everything is for that. When you’re strong you are able to combat tough situations.”

Rohit Sharma-led India will take on Sri Lanka on March 6 in Colombo. Bangladesh is the other participating team. 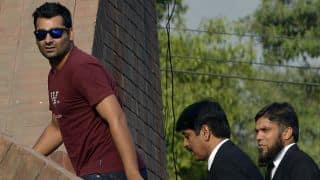