Vinay Kumar is leading Karnataka from the front this season.

Karnataka and India speeedstar, R Vinay Kumar has bagged 300 First-Class wickets in his nine-a-half-year long First-Class career. In the ongoing Ranji Trophy 2013-14 final, Vinay Kumar has grabbed seven wickets to complete the feat. He has already bagged four wickets in Maharashtra‘s second innings, and it was the wicket of Kedar Jadhav that got him to the landmark.

The Karnataka captain has now grabbed 29 wickets this season. Rising to the occasion in the final tie of the tournament against Maharashtra in Hyderabad, Vinay Kumar has already bagged eight wickets in the final.

He made his First-Class debut against Bengal on November 7, 2004. Since then, he has been a regular feature in the Indian Premier League (IPL) in Royal Challengers Bangalore‘s colours, and has also represented India in all three formats of the game. 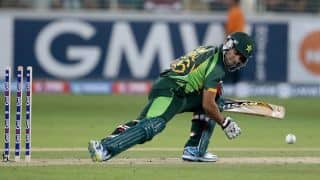