Here is a compilation of the popular dance videos of some of the most talented cricketers.

Cricket is a game that has a huge fan-base all around the world. While the fans love to see the cricketers’ skills on field, they also enjoy sneaking a peek into the favorites’ lives off the field. Cricketers like Virat Kohli, Chris Gayle and Sourav Ganguly happen to have crazy fans and not only for the enormous talent that they have, but for their powerful presence as well. It is International Dance Day today and on this occasion, here is a compilation of the popular dance videos of some of the most talented cricketers. Video: Virat Kohli, Chris Gayle dance to Shane Watson’s tunes during RCB’s IPL 2016 party

1. Taskin Ahmed celebration: Here is one of the rarest videos where Bangladesh batsman Taskin Ahmed is seen celebrating the team’s victory in a unique style. Here is the video:

2. Chris Gayle’s ‘push-up’ dance: Chris Gayle is one who sets new milestones, be it cricket or be it entertainment. The fun-loving cricketer did not leave a single chance to express his excitement as West Indies won the World T20 2012. The celebration was as colourful as the player’s character! Check it for yourself:

3. And Virat Kohli copied Gayle, adding his own touch: Kohli and Gayle are known to be one of the best buddies off the field. The two love to shake legs together, but this time, it was more of a copy and paste as Kohli did something after India won the Champions Trophy 2013 that resembled Gayle’s celebration. What do you think?

4. Dwayne Bravo and Chris Gayle with ‘Champion’: Dwayne Bravo’s ‘Champion’ song has already become one of the most famous ones among the cricket lovers all around the world. The cricketer launched the video just a few days before the ICC World T20 2016 and it became and instant hit. After the West Indies team won the tournament for the second time, the mentioned two were seen dancing to the song, and that too shirtless! Here is the video:

5. All the stars at one platform: Now, this has to be a gem. While it is mostly the youngsters who are seen shaking legs, this video has Indian cricketing legends like Sunil Gavaskar, Sourav Ganguly, Rahul Dravid and a lot more dancing together at one place. 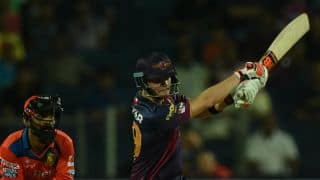