India captain Virat Kohli has set the bar when it comes to fitness in cricket, having transformed himself four years ago to become the fittest Indian cricketer, for certain, and arguably the leader across the sport when it comes to conditioning one’s body.

Along the way, this has helped Kohli become a world-class batsman who has broken records in Test and ODI cricket while soaring to the to top of the rankings in both formats.

Speaking on what changed his approach to fitness, Kohli said that the awareness of a changing cricketing landscape pushed him to transform his dietary plan and shape his body to suit the demands of today’s year-round, multi-format cricket.

“It was not to stand out in any way. I realised after playing Australia in 2012 that the template is changing very fast in world cricket,” he told the Times of India. “These guys (Australians) are getting fitter. They are able to bowl consistently, bat for longer periods. Maarne ko ball hi nahin mil raha hain (they are not bowling loose deliveries.) I wondered how it is possible that over a period of four Test matches, you don’t get loose deliveries to hit.

“When we were batting, we had to work three times harder. Then I figured out that it’s a question of fitness level. I wanted to improve my fitness first because I didn’t want to be left behind. The way world cricket was going, I realised that if I stick to my ways and be stubborn about it then I’ll never improve. I was doing my own thing on the sidelines and started seeing results.”

“Shankar Basu was the first one to point it out to me that if you don’t change your fitness level, then you’ll be not be able to compete at the level of these guys,” said Kohli. “He knew it from that time. I have been working with him for years. He changed the whole scene after he came in.”

Kohli feels that the results of the Indian cricket team’s increased focus on fitness has yielded excellent results, in particular in regards to the current crop of fast bowlers which is the best unit ever assembled in Indian cricket history.

“You can see the difference in Test cricket. Our guys are not giving loose balls anymore,” he said. “Batsmen fear our bowlers because they are able to bowl for longer periods regularly. They have clarity in their mind because their body is supporting their mind.”

Despite having set the bar for fitness so high, Kohli insisted that he did not tell his team-mates to aspire to be like him.

“Invariably, people see me and say, ‘yaar yeh 11 saal se khel raha hain. Yeh chaahe toh aaram se yahaan baitke aaram se chill kar sakta hain. Issne itna perform kiya, yeh phir bhi aise kyu karta hain? (this guy’s been playing for 11 years, he can easily sit back and relax. He has performed so well and yet why is he going through this gruelling routine?)’ So they feel ‘hum kyu nahin kar sakte hain (why can’t we do this)?’ It’s not like they have been told to do it. That’s how they come around the whole thing.”

Being physically superior has been a huge factor in Kohli morphing into a world-beater today. Asked about how he remains so consistent, Kohli said it takes a lot out of him physically and mentally, but now that it was part of his nature, he felt it was “boring”.

“Consistency and success is nothing but repeating things day in and day out,” he said. “It’s actually boring. Consistency’s boring. It’s very tough.” 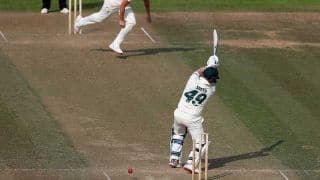